A HOUSE FOR THE STRUGGLE.

At the same time, the visibility of Black publishing plants and media buildings placed their inhabitants at constant risk. As public symbols of Black success, the offices of Black periodicals were frequently vandalized or defaced; an extension of the physical violence faced by Black journalists and editors attempting to speak truth to power. If buildings were rented, an unwelcome editorial or opinion-piece passed on to a landlord or city planning official could result in threats of eviction.

​On some occasions, persistent forms of harassment or vandalization escalated to extreme levels. After investigative journalist and pioneering civil rights activist Ida B. Wells had published an 1892 editorial in Memphis Free Speech denouncing the prevalence of lynchings across the South, an angry white mob burned the newspaper's offices to the ground and threatened Wells with death if she ever returned to the city (Giddings, 2009). 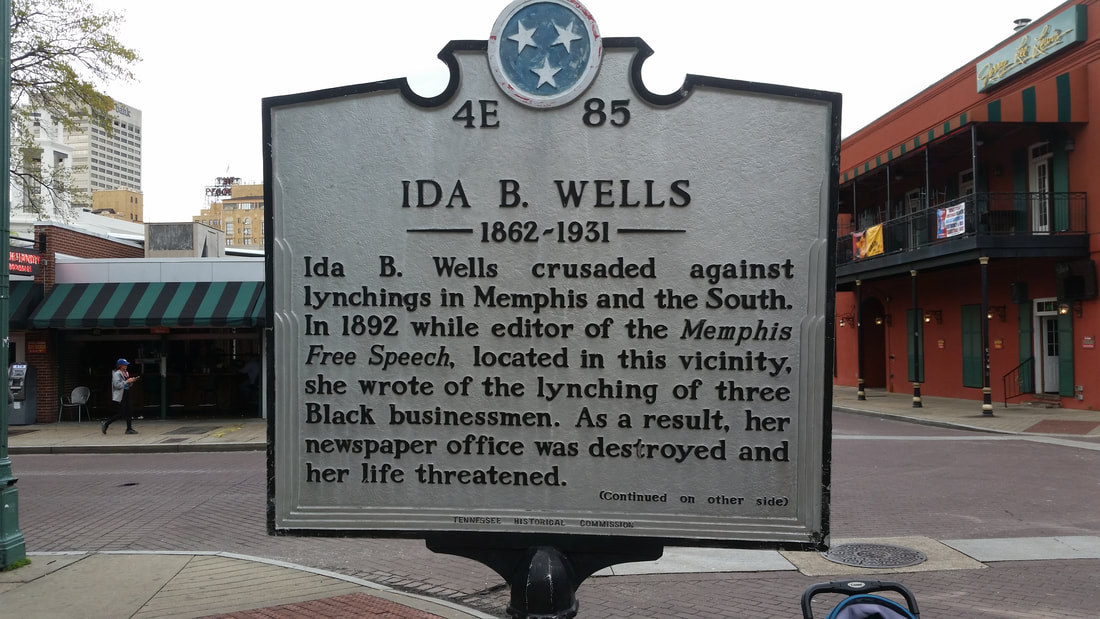 Ida B. Wells Historical Marker. Laryn Kragt Bakker
In 1898, Alexander Manly, the owner and editor of the Wilmington Daily Record, published another editorial objecting to the representation of Black men as sexual predators in the white press. Facing a hostile white backlash, Manly was forced to move his printing press into a new location at the dead of night. Several months later, a white mob broke into the Daily Record's new headquarters, set it ablaze, and gutted the remains.  The destruction of the newspaper's offices were the catalyst for the 1898 Wilmington massacre; a violent white coup which led to dozens of Black deaths and decimated the city's vibrant African American community for generations (Cecelski and Tyson ed., 1998).

Arson attacks and the destruction of Black press buildings, as well as violence towards individual Black journalists, continued throughout the twentieth century. Like institutions such as the Black church, the Black press remained an attractive target for white supremacists and anti-Black terrorist groups such as the Ku Klux Klan. During the 1921 Tulsa race massacre, the offices of the Tulsa Star were among the many Black business enterprises to be destroyed. The Jackson Advocate, a leading Black southern newspaper, was so frequently targeted that by the 1990s it had become known as 'the most firebombed newspaper in America.'

Interior of Jackson Advocate after firebombing, January 1998. Vickie King / Clarion-Ledger​
Despite such dangers, Black publications - and their buildings - persisted. Black publishers and editors understood that maintaining a physical presence for their media enterprises provided a statement of intent - and a form of protest - for white as well as Black audiences. Furthermore, Black press buildings could be utilized in ways that further advanced the struggle for racial justice, just as the commentary provided by many individual outlets reinforced the press' reputation as a 'fighting press.'

​​Whereas newspapers on New York's Park Row had projected breaking news stories onto canvases on the front of their buildings, the NAACP flew a flag outside of The Crisis offices at 69 Fifth Avenue every time a black person was lynched - an act of protest which led to threats of forced relocation. 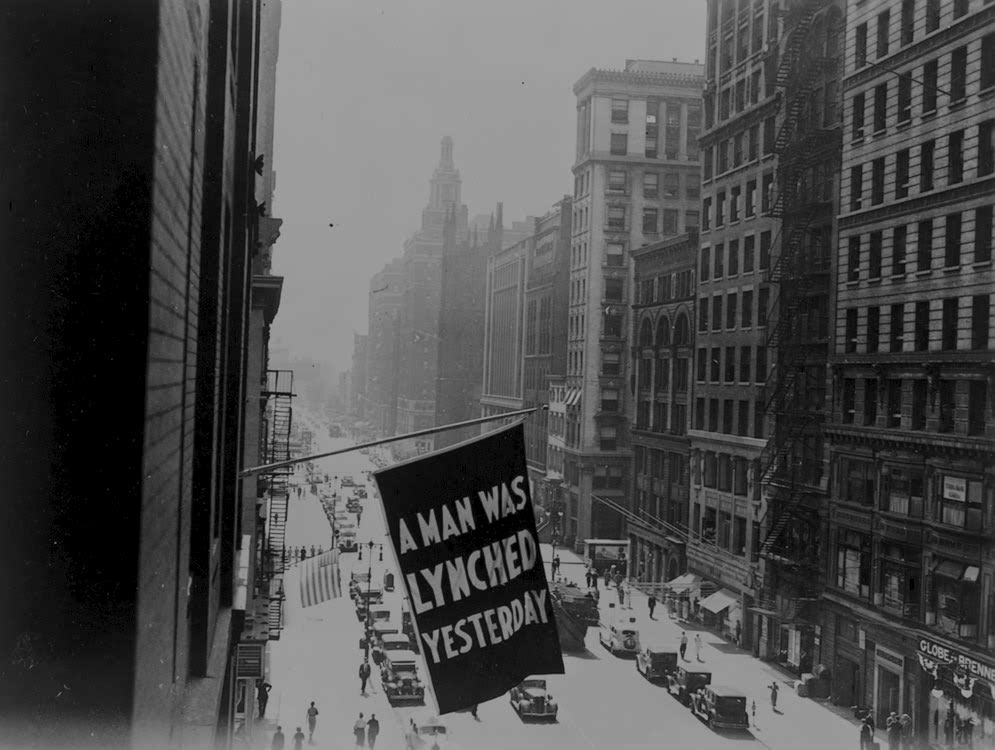 “A Man was Lynched Yesterday", 1938. MPI/Getty Images
The Chicago Defender was a particularly vocal critic of Southern race relations, defending Black people accused of crimes and celebrating those who fought back against white supremacy. On occasion, the South came North in the shape of Pinkerton agents and angry white agents of law enforcement who attempted to confront publisher Robert Abbott in the Defender's offices. On such occasions, Abbott turned to the support of local supporters such as Ed Wright and George Cleveland Hall, whose efforts to ward of white intruders were gleefully recalled in later issues of the newspaper:

"The papers of Atlanta all published big stories speaking to the fact that the editor of The Defender was to be brought back there on a certain morning on the 9:40 train. Ed Wright and Dr. Hall came into the fight with these two men. They ran the Georgia 'gentlemen' out of The Defender office and finally out of Chicago."

If Black journalists and publications were 'Soldiers Without Swords", then the buildings they inhabited were both castle and sanctuary (Nelson, 1999). On occasion, the overlap between buildings providing a home for media production and a platform for civil rights became almost indistinguisable, such as when the Chicago Defender plant at 2400 South Michigan Avenue doubled as the offices of the Chicago Urban League during the late 1950s and early 1960s.
(L) Defender Building in the 1950s, (R) Bill Berry and others at Defender Building, 1959.
​Getty Images/UIC Special Collections
While some Black publications could point to such relationships as further evidence of their civil rights credentials, Black press buildings also became staging grounds for broader disagreements over editorial philosophy and the struggle for Black liberation. The personal memoirs and archival collections of Black journalists and editors shed light on the often fraught politics of the individual publications and the ways in which these politics manifested themselves through the built environment.

In some instances the radical politics of editors saw them become marginalized within Black media spaces. For some editors, the newsroom became an arena to voice their criticisms of editorial policy. When Ebony editor John Woodford dramatically quit Johnson Publishing Company during the late 1960s, he posted a "Martin Luther-like manifesto, defiant and full of self-inflating invective, on several walls in Ebony's offices."

On other occasions the racial politics of the 'Black newsroom' were disrupted by non-Black editors or journalists such as Ben Burns, a white journalist who worked at the Chicago Defender and also played a major role in the early development of Johnson Publishing Company. In his memoirs Nitty Gritty, Burns offers numerous tales of how his own racial identity shaped his positionality within the company's headquarters, speaking to how external debates about race relations and racial discrimination influenced the internal dynamics of Black publications. Burns' role was a cause of both aggravation and amusement to many of his Black colleagues, with occasional notices posted around the newsroom either challenging his role or poking fun at his alleged status as a 'race traitor' and a 'white Mau Mau.' 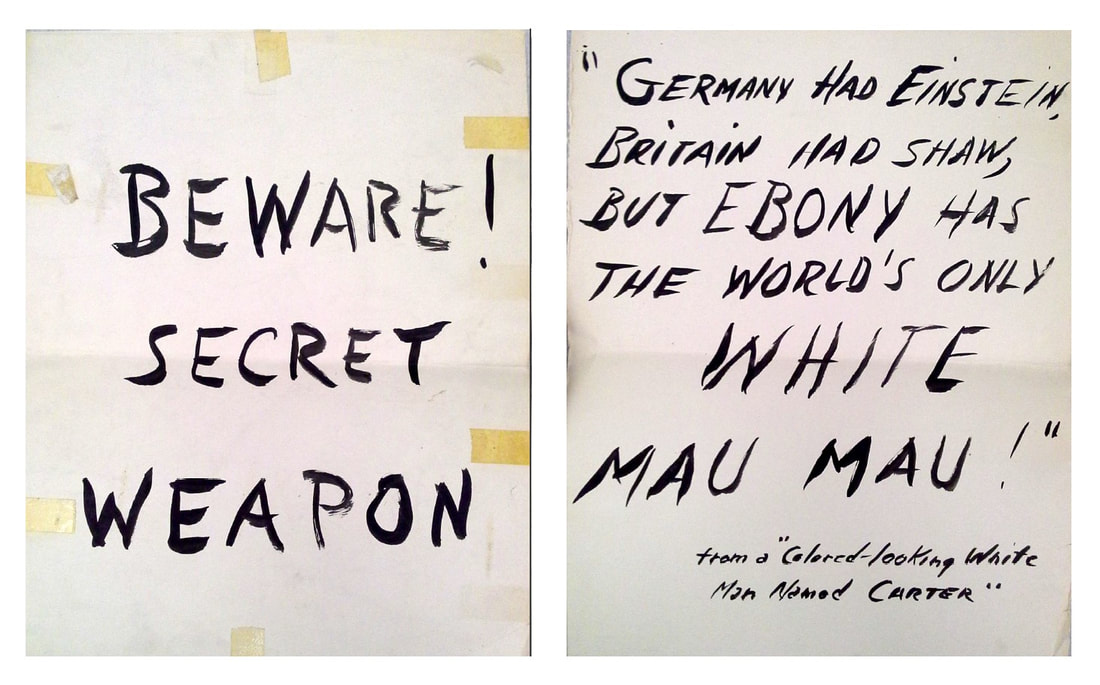 In response, Black journalists staged sporadic walk-outs and strikes inside or outside of Black press buildings. As part of a memorable 1961 strike at the Chicago Defender, members of the Chicago Newspaper Guild paraded up and down in front of the newspaper's recently purchased Michigan Avenue headquarters - a scene which echoed the newspaper's ongoing coverage of civil rights protesters.
Licensed under a Creative Commons Attribution 4.0 International License
​© 2020 Building the Black Press