Simply by existing, Black press buildings provided a potent reminder of the historic mission of Black periodicals to provide a 'voice for the race.' Yet the buildings inhabited by Black publications also 'spoke' to their success or failure as Black business enterprises. If a publication was important for African American audiences, surely it should have a building that lived up to its reputation? Accordingly, early Black newspapers wasted few opportunities to celebrate moves to larger or more impressive buildings. 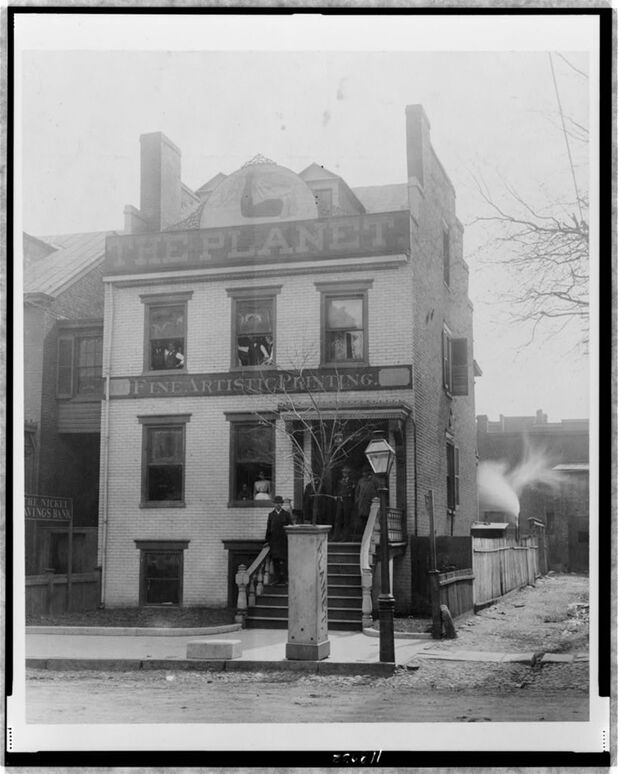 People posed on the porch of the Richmond Planet, 1899. Library of Congress Prints
In an increasingly congested Black periodical market, Black press buildings became an important yardstick for measuring cultural and political significance. This sentiment is on clear display in an early issue of the Colored American, which moved its offices from West Canton Street in Boston to a new location at 5 Park Square in 1900.
"At present time the Colored American Magazine occupies the most elaborate and best equipped rooms and offices of any race publication, and with the complete press-room and bindery that it is proposed to establish in the near future, the Company will possess an equipment that will easily place it at the head of all Negro Publishing Enterprises."
In addition to size and the procurement of suitable equipment, Black publications also used the interior and exterior design of their buildings as a way of commenting on or showing evidence of their efforts to 'uplift the race.' Few Black publications were able to commission their own buildings or employ Black architects or designers. In their absence, furnishings and other interior features were used to visually craft a narrative of racial progress. Staged photographs of Black newspapermen and women 'at work' helped to reconfigure and repurpose the workplace in ways that reiterated the importance of independent Black publishing concerns. 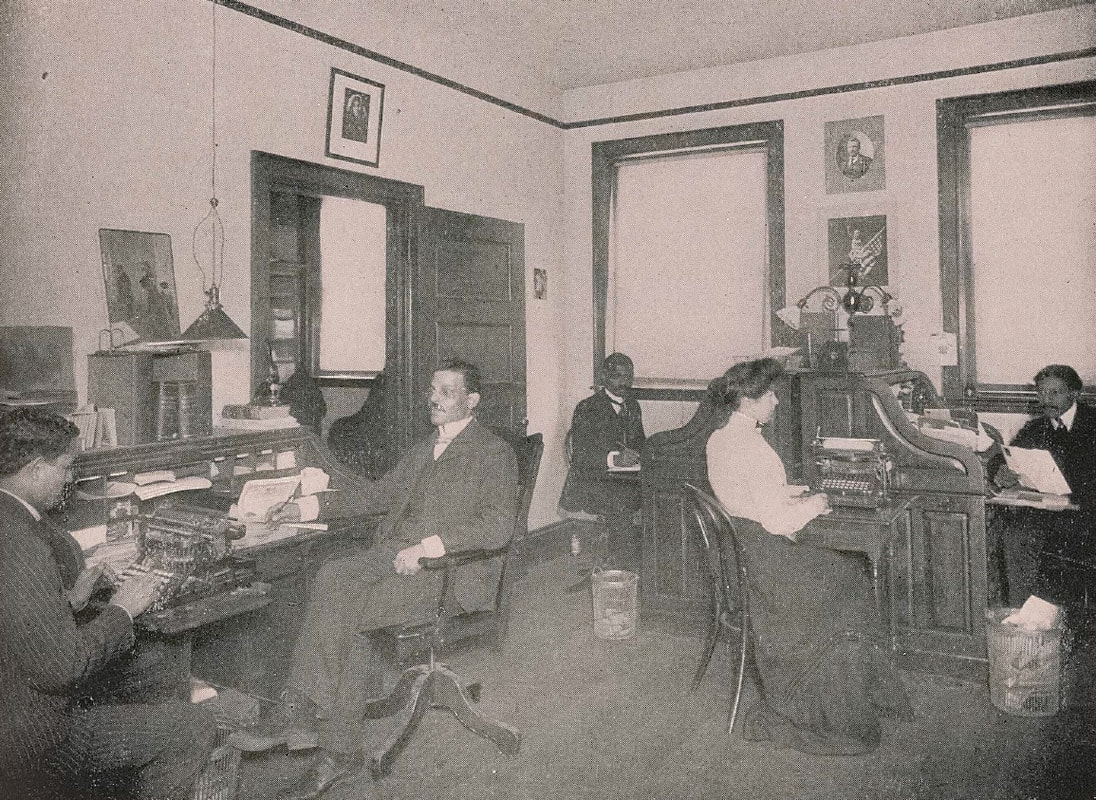 Black journalists at the Colored American, 1902.
As the financial clout of Black publishers and business owners grew, some were able to finance the construction of new buildings that would embody the true 'spirit' of the periodicals which inhabited them.

A powerful example of this effort to align spatial and editorial representations of Black identity can be seen through the design and construction of the Chicago Bee building during the 1920s, which was financed by Back business magnate Anthony Overton. Built within the context of the "New Negro" movement and the ascent of architectural modernism, the building was an attractive, art-deco inspired addition to the South Side's skyline. Its impressive stature helped to position the Bee as a legitimate competitor to the Chicago Defender's reputation as the city's preeminent Black publication.

More importantly, its ornate exterior design served to distinguish the Bee from the Defender, which Overton saw as a distinctly lower class affair which relied on sensationalism and the exploitation of reader fears and anxieties to help boost sales and circulation. By contrast, the Bee was a 'respectable' organ - a sedate and sophisticated publication which "would adhere to professional journalistic standards and appeal to middle-class, conservative black Chicagoans" (Williams, 2014). 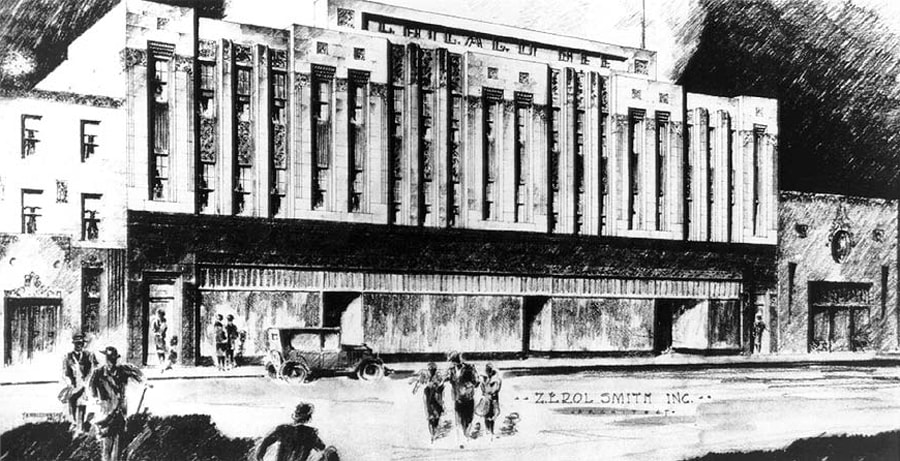 Architectural rendering of the Bee building, 1929. Z, Erol Smith / NPS
The building's bold yet functional exterior, open floor plans, and large glass facades were all hallmarks of the International Style. In addition, Moutoussamy arguably took inspiration from the postwar emergence of Brutalism, which became a popular outgrowth of mid-century architectural modernism. Its severe and functional aesthetic has been interpreted as an attempt to project 'moral seriousness', and it is perhaps unsurprising that the style came to dominate many American University campuses during the 1960s and 1970s. From a similar perspective, ​

​​The decision to entrust Johnson's vision of a bold Afrocentric publishing space to the imagination of a queer white Southerner is just one of the curious decisions behind the development of 820 South Michigan Avenue, but the results were spectacular. Architectural critic Lee Bey has described the building's interiors as 'an exuberant, high-style and fearless mix of a color, texture, art, contemporary furnishings and pattern...an afrocentric modernism that was well-turned, avant garde and quite hip - a perfect match for publisher John H. Johnson's groundbreaking magazines."

​Former Ebony digital editor Eric Easter has suggested that the building was an important part of rehabilitating the negative media image of Chicago's Black population which had been cultivated during the devastating race riots of 1968. Easter contended that 820 South Michigan was "its own loud protest - a visual pronouncement that black America had arrived in all its striving, outrageous, hip and fashionable glory." At the building's formal unveiling in April 1972, Johnson was no less dramatic
​As these images of the interiors demonstrate, the offices interior design looked to blend corporate sophistication with a sense of domestic functionality. Perhaps inspired by the lavish interior design of other black media buildings such as the Johnson Publishing edifice in Chicago, Graves opted for eye-catching design choices such as a spiral staircase which connected the 10th and 11th floors. The magazine claimed that its library - formally known as the Minority Business Information Institute (MBII) - was "the nation's only research library and information center specializing in data on minority business and economic development."

​The most dramatic design choices could be found in the 11st floor corporate office and boardroom spaces, which were described as a "traditionally 18th century English" style that was intended to create a sense of sophistication, culture and stability. Notable features included an ornate faux-chandelier in the upper reception area, and an impressive grandfather clock. The upper floor also included more artwork and collectables, including African sculptures, Romare Bearden collages, Haitian watercolors and other items designed to "depict a strong allegiance to heritage." ​Arguably the centerpiece of this approach could be seen in the Executive Dining Room, which featured lavish Chippendale and Queen Anne furnishings, brass and glass accessories and an Oriental Rug.
Licensed under a Creative Commons Attribution 4.0 International License
​© 2020 Building the Black Press