The Half-Century (1916-1925) and the Chicago Bee (1925-1947) were both founded and funded by Anthony Overton, one of Chicago's most influential Black businessmen during the first half of the twentieth century.
Overton quickly established himself as one of Chicago's leading black businessmen, expanding the operative capacity of the Hygienic Manufacturing Company and assuming the presidency of the Chicago Negro Business League. Overton also established a foothold in the publishing industry through the creation of The Half-Century Magazine, which began publication in 1916.
As the Overton Hygienic Company expanded in the years following World War I, Anthony Overton envisioned a six-story business hub for his various publishing and business endeavors. His dream became part of a rivalry with fellow black businessman Jesse Binga, and the two men came to play a central role in the development of new real estate along the South Side business corridor during the 1920s. 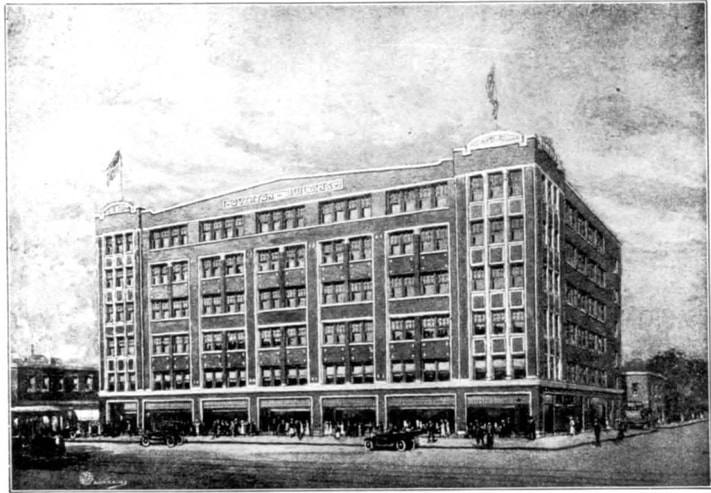 The Overton Hygienic Building, 1922. Half-Century
In 1922 Overton commissioned architect Z. Erol Smith to design a site at 3619-3627 South State Street, which would come to be known as the Overton Hygienic Building. Supported by a reinforced concrete frame, the building had a dark red brick street facade that was coupled with an elaborate white-glazed terra cotta trim which included a series of patterns, emblems and crests.

As a multipurpose office, retail and manufacturing building, the structure was both a physical symbol of Overton's business prowess, and an emblem of the vibrant black business community which emerged during the years following World War I. This message was enthusiastically reinforced by the Half-Century, which published a triumphant editorial announcing the building's opening to its audience:

"We have erected a monument; a building inside and outside that will stand as a memorial to Negro enterprise and thrift...this is the finest building ever erected and owned by colored people"

In addition to housing Overton's cosmetics and manufacturing empire, 3619 South State Street became the de facto publishing headquarters of The Half-Century magazine. From 1923 onwards it functioned as the home of perhaps Overton's most ambitious enterprise - the Douglass National Bank.

It also played host to an array of local black businessmen, including Walter T. Bailey, who was the first Black architectural graduate from the University of Illinois, and the first licensed Black architect in the State of Illinois. Bailey maintained offices in the Overton Building while working on what would become the largest commission of his career - the National Knights of Pythias Temple at 3737 South State Street. The building was completed in 1928 and quickly became known as the "Skyscraper of Bronzeville." Architectural historian Lee Bey has suggested that, at the time, the Temple was "the most expensive building ever built and designed by Black people." 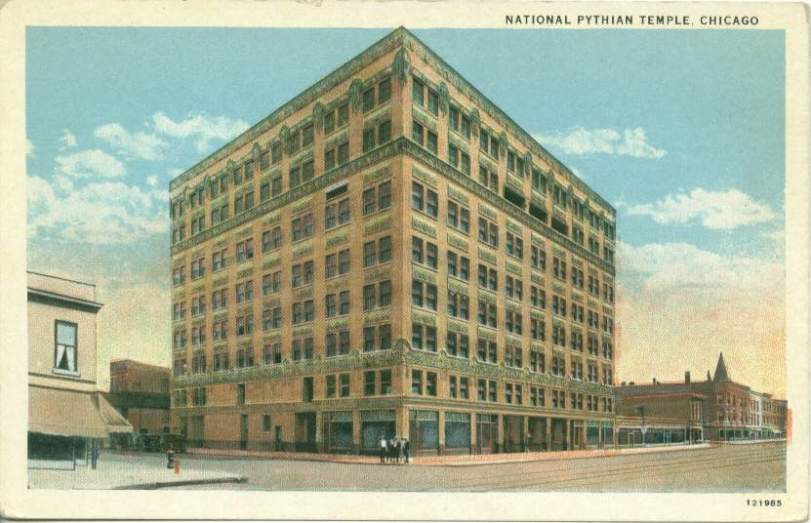 Knights of Pythias Temple. Urban Remains
In 1925 Overton retired The Half-Century and in its place debuted a new weekly newspaper called the Chicago Bee. During the Bee's early years, it was located alongside many of Anthony Overton's other entrepreneurial projects in the Overton Hygienic building. However, in order for the newspaper to develop further, Overton believed that it needed a building of its own to rival the impressive South Side offices of rival publications such as the Chicago Defender, which itself had moved into an impressive new site on South Indiana Avenue at the beginning of the 1920s. Overton had aspirations for the Bee to claim the Defender's title as Chicago's premier black newspaper. He believed that the development of a custom built site for the newspaper would play a central role in cementing it as a legitimate rival to the Defender's editorial crown.

The result - a three-story Art Deco building designed by Z. Erol Smith to the tune of around $200,000, stood as a symbol for a successful and stylish black publishing enterprise. The building's architectural design was intended to reflect a specific image of black modernity and style - a physical manifestation of the urban culture and entrepreneurial spirit of Chicago's "New Negroes", as described by scholars such as Davarian Baldwin. 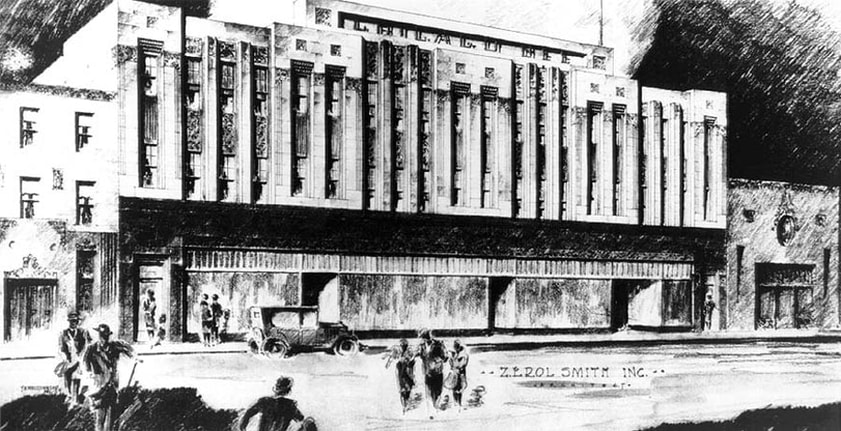 Rendering of the Bee Building. Chicago Parks District
Unfortunately, the construction of the Bee building coincided with the onset of the Great Depression, and Overton's businesses suffered. One of the most notable casualties was the Overton Hygienic Building, with Overton forced to sell the site and move his remaining enterprises into the Bee building at 3647 South State Street.

​After 3619 South State Street had been sold it was used for a range of respectable (and not so respectable) endeavors. For a while it was re-branded as the Palace Hotel, perhaps to take advantage of its proximity to sites such as the International Ampitheatre which had been built on South Halsted Street in the mid-1930s. As the State Street corridor fell into decline during the decades following World War II the Overton Hygienic Building was re-purposed into a flophouse, with its spacious rooms divided up into hundreds of tiny stalls.

After 3619 South State Street was named as a historically significant landmark in a provisional submission to the National Register of Historic Places during the 1980s, efforts to rehabilitate the site gathered pace. However, it would take close to twenty years before the necessary funding was in place to begin an extensive refurbishment project.

​In 2007 The Davis Group completed a multi-million dollar renovation aimed at restoring the build to its former glory. It is currently owned by the Mid-South Planning and Development Commission, which intend to use the space as an incubator for small business and social enterprise development. ​

The Overton Hygienic Building, 2013. Image courtesy of Eric Rogers
As for the Bee building, its status as a crown jewel in the vibrant South State Street business corridor of the 1920s faded as the focus for black business and entertainment shifted towards the intersection of 47th Street and South Parkway during the 1930s. Following Overton's death and the demise of the Bee in the 1940s the building fell into disrepair - a fate that was mirrored by nearby institutions such as the Wabash Avenue YMCA at 3763 South Wabash, which closed its doors in 1969.

A large number of historically significant building's along the South State corridor were razed as part of the city's extensive postwar urban renewal and land clearance projects. The construction of the Dan Ryan Expressway, which was completed in 1961, had a particularly damaging effect, with the highway cutting straight through the heart of many black communities. After Overton Hygienic finally went under during the 1980s the Bee building became vacant.

In a 1993 article for the Chicago Reader, Adam Langer painted a pessimistic image of the building's future as part of the broader decline of the mid-South Side over the previous four decades. Between the 1970s and the early 1990s, the population of the mid-South Side had almost halved, and a majority of its residents lived below the poverty line.. Langer estimated that nearly 1/3 of the neighborhood's property was vacant or abandoned, and prominent landmarks such as the Chicago Bee building and the Eighth Regiment Armory had suffered considerably from "the ravages of time, weather, vandals, and brick thieves." 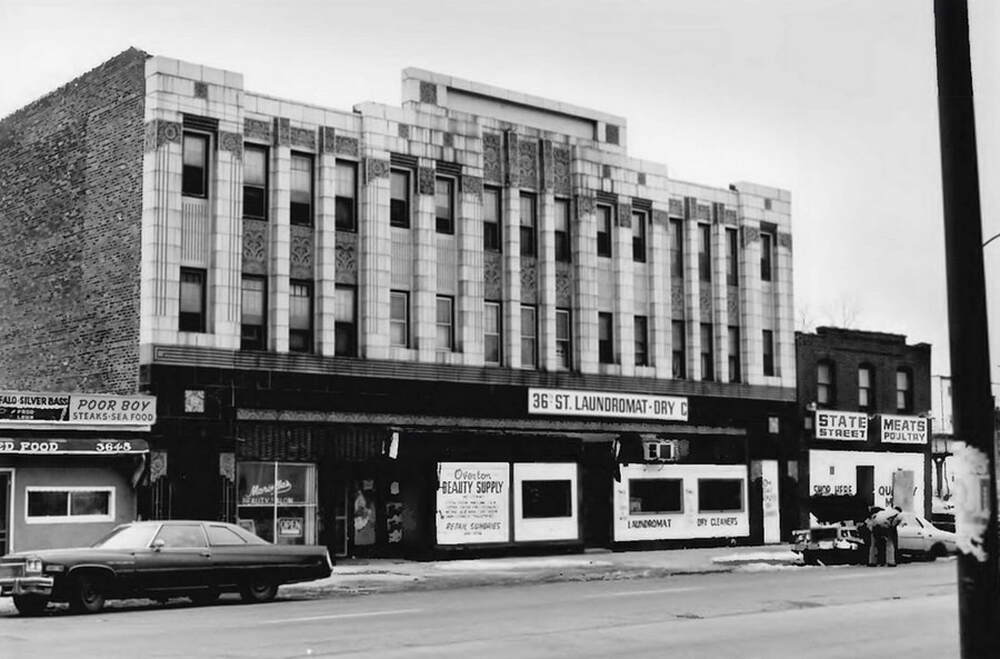 Bee building in the 1980s. National Parks Service
Grassroots efforts to help redevelop the State Street corridor led to the Chicago Bee building being added to the National Register of Historic Properties in 1986 - an important breakthrough in helping to secure the building's long-term future. During the 1990s community based organizations such as the Mid-South Planning Group pushed for the development of a Black Metropolis Historic District. A central part of the Group's plans included the rehabilitation of the Bee building as a branch of Chicago Public Library.

Following years of hard work, half-promises and frustrating delays, the restored Bee building was officially opened as a branch of Chicago Public Library in May 1996. In recent years, the building had undergone further renovation courtesy of funding from the Chicago Housing Authority, which has included repairs to its iconic exteriors and a substantial upgrading of its interior spaces.

Following its re-opening in December 2018, Mayor Rahm Emanuel declared that the "the newly renovated Chicago Bee library branch is not only a commemoration of Bronzeville's history, it is a nod to what is to come in the community...providing residents with 21st century services that will help the entire community." 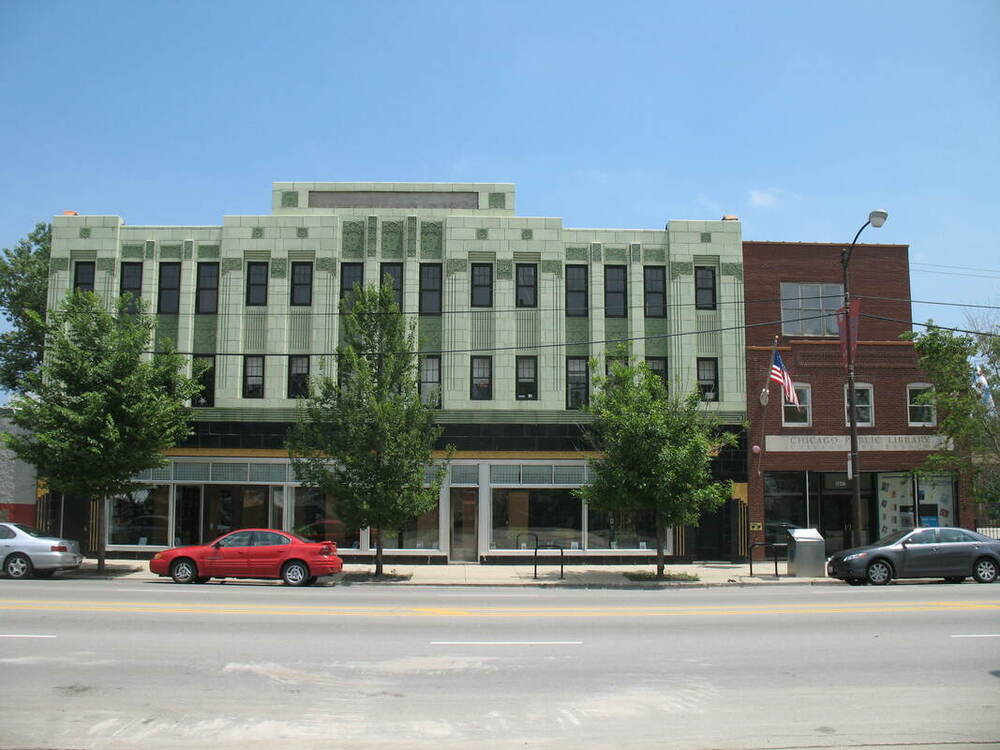 Bee Branch of Chicago Public Library, 2015. Chicago Patterns
The afterlife of the ​Chicago Bee building - as an important educational and civic center, and as part of the developing Black Metropolis Historic District - is striking given that it could easily have suffered the same fate endured by many of the area's buildings in the decades following World War II.
Licensed under a Creative Commons Attribution 4.0 International License
​© 2020 Building the Black Press