One of the first consumer magazines primarily oriented towards Black women, Essence began publication in 1970. 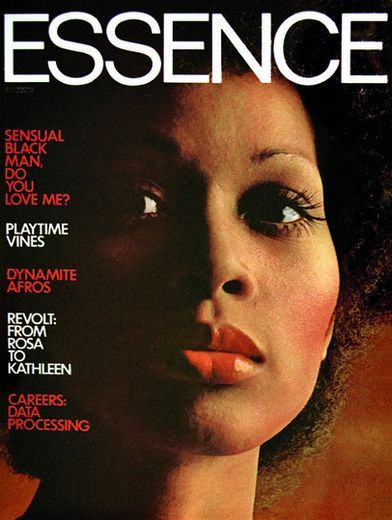 Essence, May 1970
​Essence's first home was 102 East 30th Street, a five story townhouse in midtown New York. Built in approximately 1920 and located close to the intersection of Park Avenue South and East 20th Street, 102 East 30th Street sits in the heart of Murray Hill, a Midtown neighborhood renowned for its attractive townhouse properties. Prior to housing Essence, the building had also hosted businesses such as Tachau and Vought, a mid-century architectural firm whose commissions included Louisville Public Library and Freeport Post Office.

The decision to base Essence out of the building was entirely circumstantial, with 102 East 30th housing the offices of Cecil Hollingsworth. Despite the corporate facade provided by Hollingsworth's street address, in reality the office was little more than a one-bedroom apartment on the building's second floor. Some of the apartments on the first and second floor had been converted into professional offices spaces, although the rest of the building remained largely residential - an arrangement which occasionally prompted complaints as the magazine's reputation - and office foot-traffic - increased. 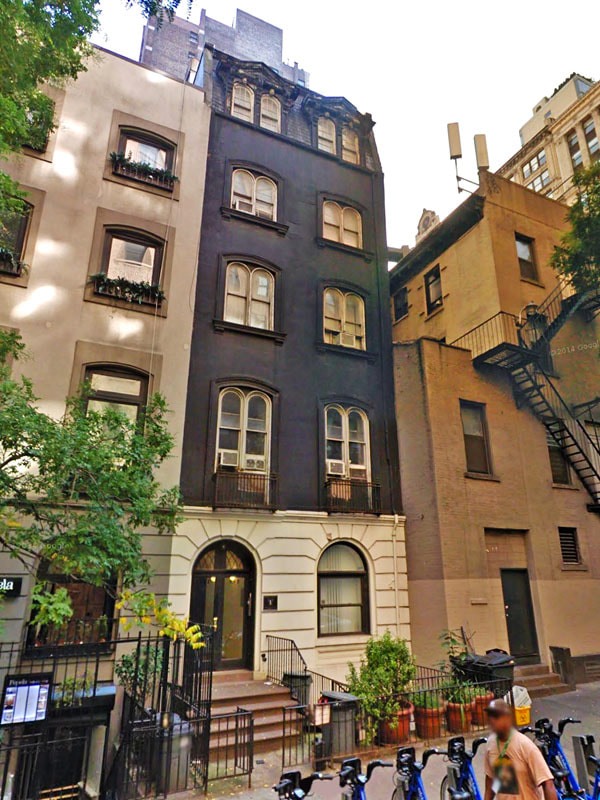 102 East 30th Street. Google Maps
Following the decision to push ahead with development of Essence by Lewis and his associates, the lower level of the townhouse was converted into a number of smaller cubicles for early editorial staff such as Ruth Ross and Gordon Parks. In the Spring of 1970 the building was ready to host the formal launch of Essence, with hundreds of guests crowding into the two floors occupied by the Hollingsworth Group. Although the magazine would quickly outgrow its relatively modest lodgings at 102 East 30th Street, Edward Lewis remembered the building, and its launch party, fondly.

"I couldn't believe the little townhouse on 30th Street had the space to accommodate the assorted crowd that was squeezing in...the narrow street running in front of our offices at 102 East 30th Street between Lexington and Park Avenues was jammed with traffic, people, and an expectant air of excitement"

As the magazine expanded its offices would also spread to include the third floor of 102 East 30th Street. The second floor remained a reception space, which separated the editorial and arts department cubicles which were situated on the lower level from the sales, circulation and promotional departments, which were housed on the third floor.

Although these spaces were officially referred to as 'offices', in reality they were small cubicles separated by freestanding partitions. While this arrangement provided the illusion of privacy, it was clear that there would be few secrets among the magazine's earlier artistic and editorial staff - something which may have contributed to some of the explosive editorial fights detailed in Edward Lewis' memoirs.

Over time, most of the floors have been converted into high end apartments, which have maintained their original features such as fire places and beamed ceilings. As the image above demonstrates, the building may not have been the most spacious or practical for the purposes of producing a magazine, but certainly provided an air of professional chic necessary to impress prospective clients and advertisers. 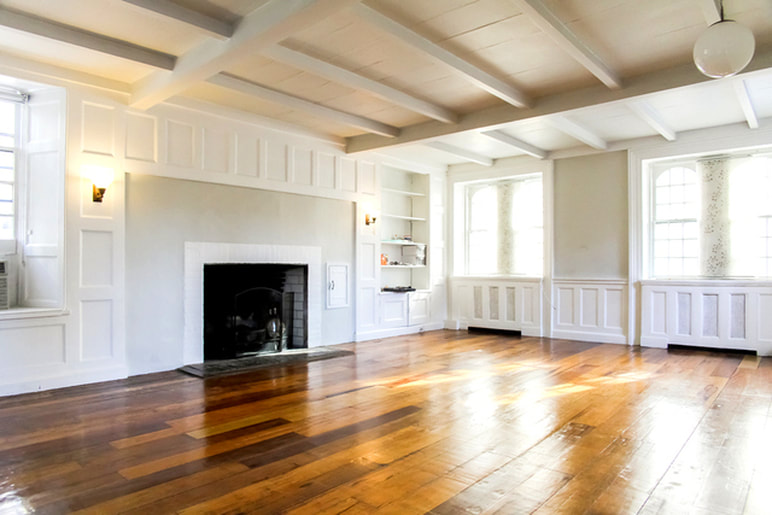 3rd Floor 102 East 30th Street. PadMapper
1974 became a banner year for Essence in a number of ways. Following a difficult formative period which was characterized by financial and editorial problems, the magazine became fully capitalized in 1974. This was a move which helped to significantly raise its circulation and ad rate base, and to attract new subscribers.

​There were a number of reasons for the change, but perhaps the most significant was the influence of Marcia Gillespie, the magazine's dynamic editor-in-chief. 1974 also marked the departure of Cecil Hollingsworth, who had been arguably the most influential of the magazine's four male founders.

300 East 42nd Street. Nate Lindsay/Emporis
Changes on an editorial and corporate level were reflected in a relocation from the brownstone townhouse on 30th Street which had been the magazine's early home to a new base at 300 East 42nd Street. The building, a 17 story high rise in the Tudor City neighborhood of Manhattan, had been designed by William Lescaze & Associates and was completed in 1963.

For Lewis, the move to 300 East 42nd Street was an important part of Essence's transition from control by the Hollingsworth Group to Essence Communications Inc. It also played an important role in legitimating this new enterprise. In contrast to the somewhat domestic interiors of 102 East 30th Street, the new building was an altogether more professional mixed-use building.

​However, the magazine would only be at its new address for a short while before moving again to 1500 Broadway, a recently completed skyscraper on the corner of Times Square. 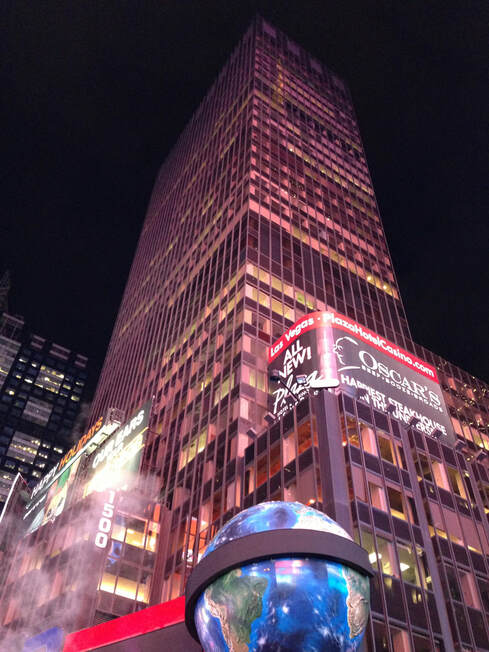 1500 Broadway, 2013. Thomas Craven
1500 Broadway was completed in 1972 by the Arlen Realty & Development Corporation, At close to 120 meters tall and with around 500,000 square feet of office and retail space, the building takes up an entire side of East Broadway between 43rd and 44th Street. Today the building one of the most striking features on Time Square, which has emerged as perhaps the central tourist landmark in Manhattan. 1500 Broadway is famous for its seven-story NASDAQ wraparound ticker tape display and the glass fronted studio of ABC's Good Morning America television show. However, during the 1970s, Essence was moving into an altogether less desirable location.

While Times Square had gained a reputation as one of New York's premier cultural hubs in the aftermath of World War I, with dozens of theaters and upmarket hotels, the onset of the Great Depression had a disastrous impact on the neighborhood. An increasingly run-down and dangerous area of the city, Times Square's connection with seediness and the underbelly of the modern American city would be further cemented during the decades following World War II.

By the time that Essence moved into the building, the neighborhood's reputation had become indelibly linked to the 1969 film Midnight Cowboy, which would win nods for best picture, best adapted screenplay and best director at the 1970 Academy Awards. Set within the "gritty, vice-riddled world of Times Square", the film starred Jon Voight as a young prostitute and Dustin Hoffman as an ailing grifter, aiming to get ahead amid the neighborhood's burlesque bars, sex parlors and other 'entertainment' venues.

Times Square in the early 1970s. Gothamist
In contrast to the squalor which reigned outside of 1500 Broadway, Edward Lewis imagined the Essence offices as a popular and welcoming space for all members of the black community. Just as other black publishing enterprises such as the Chicago Defender ​and Johnson Publishing Company came to champion their offices as an inclusive and egalitarian environment, so too were the Essence offices at 1500 Broadway celebrated as a civic space.

"The Essence offices were a popular visiting place for everyone from high school students on a class trip to hip-hop celebrities...on any given day, out-of-town visitors, models, writers, photographers or entrepreneurs...were likely to be seen passing through the sleek Essence offices at 1500 Broadway in the heart of Times Square."

1500 Broadway would house Essence from the mid-1970s until the early 2000s. During this period, the magazine's monthly paid circulation would grow to more than 1 .5 million.

In 2000 Time, Inc. acquired a 49 percent stake in Essence Communications, and when the company purchased the remaining 51 percent five years later the magazine's offices moved from 1500 Broadway to the 4th floor of a Time, Inc. owned building at 135 West 50th Street in Midtown, located close to the Time & Life Building on Avenue of the Americas. 135 West 50th Street was more casually known as the Sports Illustrated building, as the landmark American sports magazine had been formerly housed there.
The move into a Time, Inc. space, coupled with the corporation's buyout of Essence, led to significant community pushback and criticisms that the magazine was no longer under black ownership. Journalists such as Min Livingston, writing for the Louisiana Weekly, went so far as to suggest boycotts against the magazine, arguing that 'your Essence dollars go to support one of the three wealthiest media conglomerates on earth and their oppressive buddies.' Former editors such as Constance White also spoke out against the impact of the Time, Inc. takeover, suggesting that they were pressured to limit discussion of black art, culture and other themes.

A little over a decade after the magazine was bought by Time, Inc., it was once again under black ownership after control shifted to Essence Ventures, a business endeavour owned by Richelieu Dennis who had made is fortune as the owner of Shea Moisture.

Shortly before the takeover, the magazine's base of operations had shifted outside of Manhattan for the first time in its forty-plus year history, after Time, Inc had decided to move out of its Midtown offices at the Time & Life building and 135 West 50th Street. The majority of staff were moved to 225 Liberty Street, however the Essence team were among staff shifted to offices at 241 37th Street in Brooklyn. The space was part of Industry City, a massive manufacturing and warehouse complex which had been developed during the 1890s by Irving T. Bush, Then known as Bush Terminal, Industry City quickly became a major industrial hub with more than 20,000 workers. 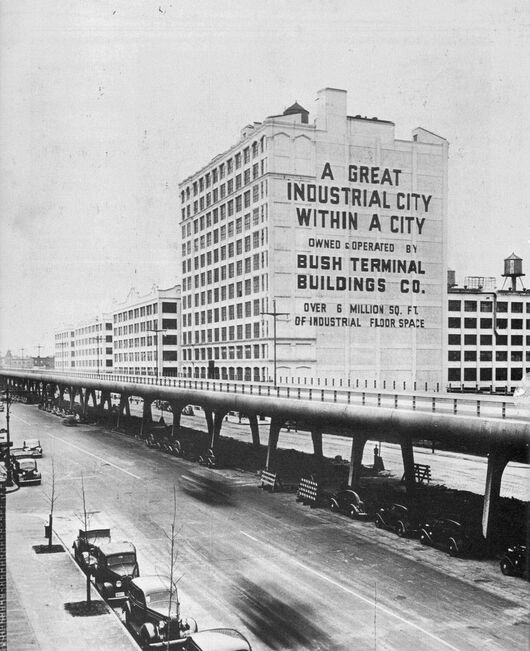 Bush Terminal/Industry City, 1940. Brooklyn Public Library
While Industry City thrived during the first decades of the twentieth century, by the 1960s the decline of urban manufacturing and deindustrialisation had left large sections of the site unoccupied, and the next few decades saw an extended period of disinvestment and decay. The site's fortunes began to change at the beginning of the 21st Century, and in 2013 extensive redevelopment work began under the combined leadership of the Belvedere Group and Jamestown. 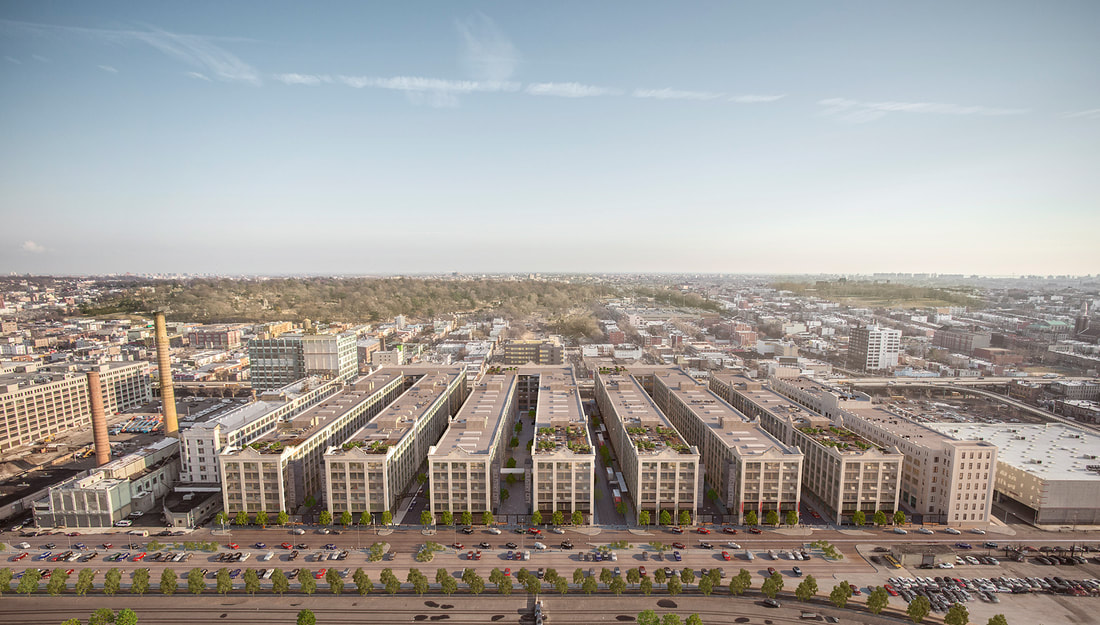 Industry City, 2014. Industry City.
After Essence was sold off by Time, Inc. it was initially unclear whether the magazine would have to move out of Industry City. However, at the beginning of 2019 it was announced that Essence Communication had signed a ten-year long lease on another site within the Industry City complex at 34 35th Street.
Licensed under a Creative Commons Attribution 4.0 International License
​© 2020 Building the Black Press