A CROSSROADS OF THE WORLD

Kwame Nkrumah arriving at JPC
Ebony, 1961
In an early issue of the Chicago Defender, the newspaper informed readers that its offices were still located in "unpretentious quarters on the second floor at 3159 State Street." Despite the somewhat cramped nature of its first editorial address, the Defender encouraged visitors to drop by.

"No matter what it is - pleasing or otherwise - come in and let us talk it over. Maybe you can help us, maybe we can help you - COME IN. The Chicago Defender is the people's paper and its office this year will be the meeting place of all the people."

This sentiment was a common theme throughout the editorial content of many early Black newspapers. During their formative years, Black periodicals often looked to position themselves as "community papers" that were deeply invested in the uplift of local Black communities. Accordingly, their offices became a sort of Black public square where readers and local residents could congregate to discuss pressing matters or concerns.

As the influence and circulation of Black publications expanded, they began to draw in visitors from further afield. By its tenth anniversary the Defender was printed regular notices that listed out-of-state arrivals, ranging from newlywed couples to iterant salesmen.

​In Harlem, the Black public flocked to the headquarters of the Universal Negro Improvement Association (UNIA) and the offices of the Negro World, hoping to catch a glimpse of Marcus Garvey, the enigmatic Black nationalist leader and the figurehead of the Garvey movement. When pioneering Black Merchant Marine Captain Hugh Malzac visited the World's offices on 135th Street several years after the end of World War I, he was confronted with "a line more than one hundred yards long" waiting to enter the location.

Men outside the UNIA/Negro World headquarters on West 135 Street, 1924. James Van Der Zee
The desire of everyday African Americans to visit the UNIA's offices reflected the reach of the Garvey Movement throughout the nation and, indeed, throughout the world. As Mary Rolinson and other scholars attest, Garveyism provided an avowedly working-class and grassroots alternative to organizations such as the NAACP, which were populated by members of the Black elite. For the Negro World specifically, this enthusiasm reflected the paper's critical role in cultivating support for the Garvey Movement far removed from its offices, located in what Stephen Robertson describes as "the very heart of Black Harlem."

In addition to welcoming rank-and-file members of the Black community, Black press buildings became hotspots for prominent Black leaders, celebrities, and public personalities. This relationship proved to be mutual beneficial for both parties; providing Black notables with access to the Black press and the publicity it provided, and further reinforcing the role of Black press buildings as "the meeting place of all the people."
Across the country, the daily routines of Black press journalists were regularly enlivened by impromptu visits from figures such as heavyweight boxing champion Joe Louis, who dropped by the Pittsburgh Courier offices in 1946 for an spot of putting practice. 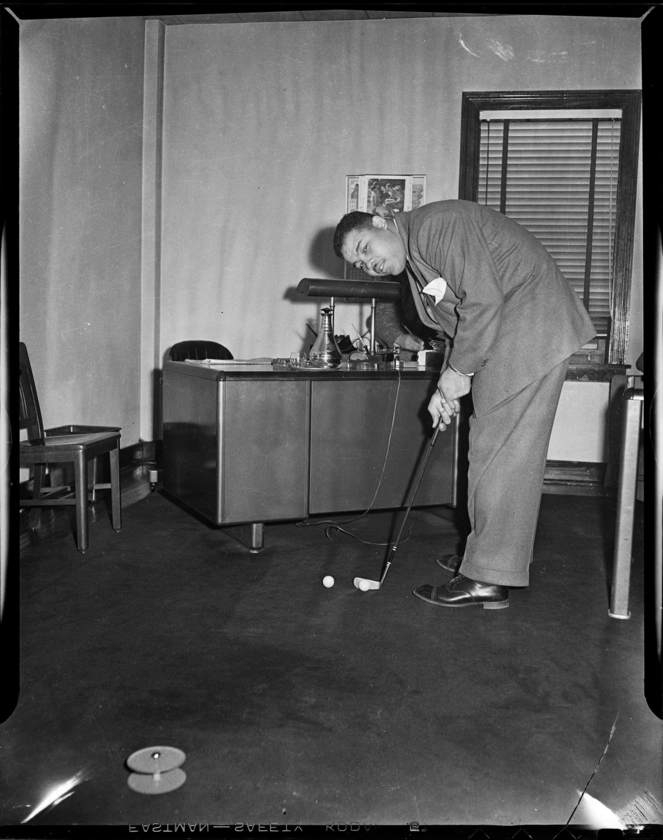 Joe Louis in the Pittsburgh Courier office, 1946. Carnegie Museum of Art
Visitors were not restricted to the United States, with Black periodicals witnessing a growing number of international tourists by the middle decades of the twentieth century. This trend reflected the global reach and increasingly diasporic editorial perspective of many Black American publications, with Black journalists looking to make connections between the struggle for decolonization abroad and the fight for civil rights at home.

As the pace of decolonization in Africa and the Caribbean quickened, a number of prominent Black leaders and political statesmen conducted visits to the United States to establish new diplomatic connections and foster trade partnerships. On many of these visits, Black leaders took care to visit important Black businesses and community institutions, with Black press buildings being high on this list. Such visits highlighted the international reputation of the Black American press, and the symbolic value that Black diasporic activists and organizers attached to their buildings. 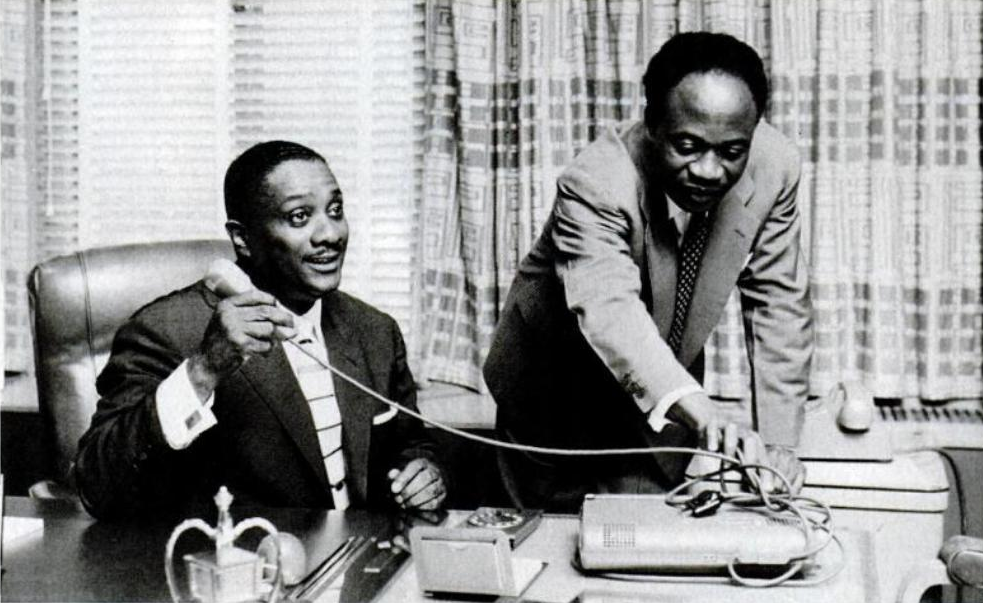 John H. Johnson and Kwame Nkrumah, JPC offices. Johnson Publishing Company
The constant stream of visitors passing through the office of Black publications across the country provide a reminder that such locations were not just centrifugal sites from which news about Black communities was disseminated outwards to expectant readers, but also centripedal sites which drew people in. Accordingly, they became, as Ebony would proudly describe its own offices to readers, a "crossroads of the world" - sites at which the diversity and complexity of Black life within and beyond the United States was regularly put on display.