At its peak of its influence, the Afro-American​ had two main editions - published twice weekly out of Baltimore and Washington, D.C. - and a host of regional editions in cities such as Philadelphia, Richmond and Newark.

​The paper's founder, John Henry Murphy, Sr., was a former slave who, like many nineteenth century Black publishers, gained his formative experience with the printing press through connections to the Black church. In 1892, Murphy merged his own Sunday School Helper with two other publications - the Ledger (published by George Bragg of St. James Episcopal Church) and the Afro-American (directed by the Revered William Alexander of the Sharon Baptist Church). The unified paper took its name from the latter two publications, initially circulating as the Afro-American Ledger before becoming the Afro-American.

Masthead of the Baltimore Afro-American, 1913.
On a local level, the Afro-American challenged Baltimore's white political establishment to address segregation and racial discrimination, and to improve Black representation in the city's police force and within its political system. More broadly, the paper advocated for civil rights across the country, often collaborating with organizations such as National Association for the Advancement of Colored People to draw attention to salient causes.
​In addition to its central offices on Saint Paul Street, the Afro-American maintained an Uptown office at 1336 North Carey Street, around two miles north-west of its main headquarters. ​

During World War I, urban redevelopment efforts in downtown Baltimore led to a significant portion of St. Paul Street being scheduled for demolition. In a June 23, 1917 editorial, the Afro-American bemoaned the city's efforts to raze large sections of the neighborhood which had played host to a vibrant middle-class Black community during the late nineteenth-century

By the end of World War I, the Afro-American's production plant had moved to 628 North Eutaw Street; located around half-a-mile northwest of its St. Paul Street offices in the neighborhood of Seton Hill. A three-story, block-building, the Afro's new address provided the necessary space to expand its operations, and, by Murphy's death in 1922, the newspaper had become the most widely circulating Black periodical on the eastern seaboard.

​Its Eutaw Street headquarters housed its advertising, circulation, and business offices, printing and typsetting machines, engraving, teletype, and mailing departments, a photography studio, storage rooms, a garage for its distribution trucks, and the paper's corporate archives. Over the following two decades, the Afro-American would gradually purchase surrounding buildings, eventually owning all seven structures on the North Eutaw street block around its main publishing plant. 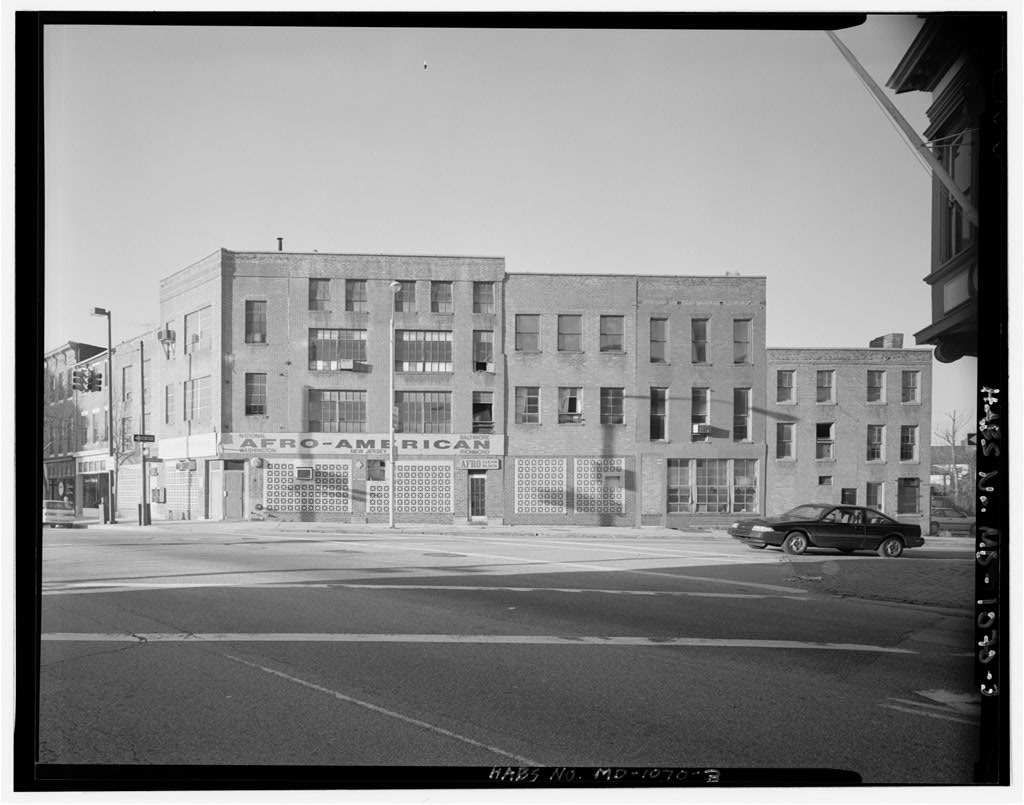 Afro-American offices, Eutaw Street. Library of Congress
Prior to his death, Murphy passed on as much of his accumulated knowledge about the newspaper trade and the intricacies of the Black press to his five sons, and they continued to manage the paper's development. The family was lead by Carl Murphy, who became the Afro-American's editor-publisher, and Arnett Murphy, who became its advertising director.

Addresses taken from the 1937 issue of the Negro Statistical Bulletin
Outside of Baltimore, the paper's most significant local edition was the Washington Afro-American, which was housed at 1800 11th Street in North West Washington, D.C. The newspaper was based at this address from 1937 until the late 1970s, when it relocated to a new home a few blocks southwest at 1612 14th Street, NW.

Following the Afro-American's departure from 1800 11th Street, the building was converted into offices by Howard University-educated architect Albert Cassell. As for 1612 14th Street, this Italianate-style building, built in 1902, was designated a contributing property to the Fourteenth Street Historic District and added to the National Register of Historic Places in 1994. By the early twenty-first century, the Washington Afro-American had moved again, to a new location at 1917 Benning Road in the Carter/Langston district of northeast D.C. 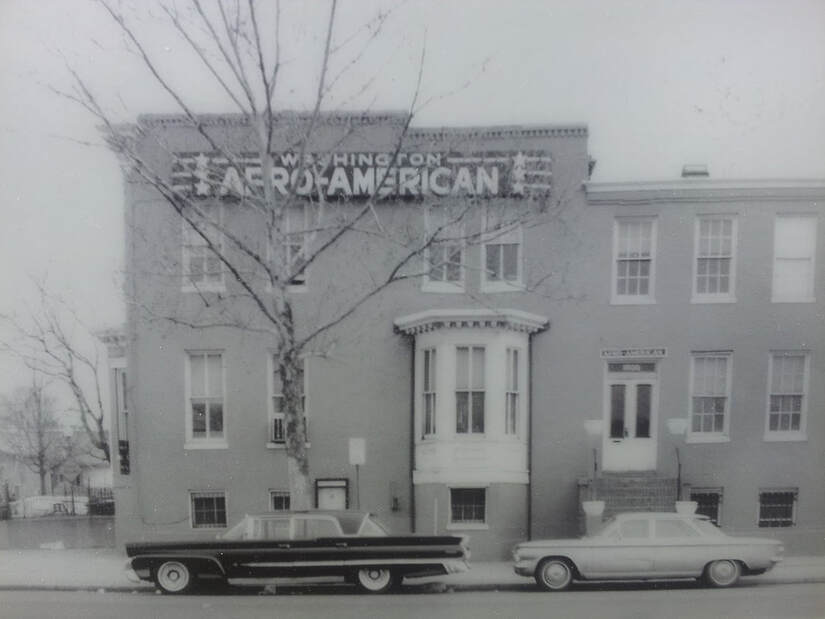 Washington Afro-American offices on 11th Street, Washington, D.C. Wikimedia
Like the overwhelming majority of Black newspapers and newspaper chains, the Afro-American fell on hard times during the latter decades of the twentieth century. In 1988, John Oliver, Jr., the company's chairman and the great-grandson of Afro founder John Murphy, Sr., announced plans to cut the newspaper's production schedule from twice to once a week. Other streamlining efforts included the departure of around fifteen employees, the majority of whom were based at the Baltimore headquarters. By this point, the circulation of the Baltimore Afro-American had fallen to less than 11,000 per week and the Washington, D.C. edition was drawing between 5 and 6,000 per week - a far cry from the heydey of the 1940s and 1950s.

These cutbacks, along with falling circulations, meant that by the end of the 1980s, the Afro's Eutaw Street plant was largely unused, and the company began making plans to vacate the property. Firstly, the Afro began to relocate some of its archival holdings to Bowie State University. Frederick Stielow, a professor of Library Science at Catholic University and one of the external consultants the Afro relied upon in moving its archival holdings, relayed a chaotic scene at the newspaper's Eutaw Street plant to the Baltimore Sun: "there was stuff stored in the attic, the basement, on the loading dock, in rooms - everywhere."

In 1991, a contract was agreed to sell the Afro's various holdings on Eutaw Street to Summitt Properties, which planned to build a 59- unit apartment complex on the site following the newspaper's relocation. By the end of the following year, Frances Draper, now president of the newspaper's parent company, announced that the Baltimore Afro-American and the headquarters of the Afro-American newspaper chain would be moving to 2519 North Charles Street. Draper contended that "we need [a] more modern headquarters...with the advent of computers and the changes in the way you print and produce the paper, we need a third of the space we once did."

Following the Afro's relocation but prior to the beginning of the site's demolition, 628 Eutaw Street was photographed as part of the Historic American Buildings Survey. The images captured provide both an eerie window into the Afro's decline and a visual metaphor for the broader challenges facing many of the country's Black legacy newspapers. 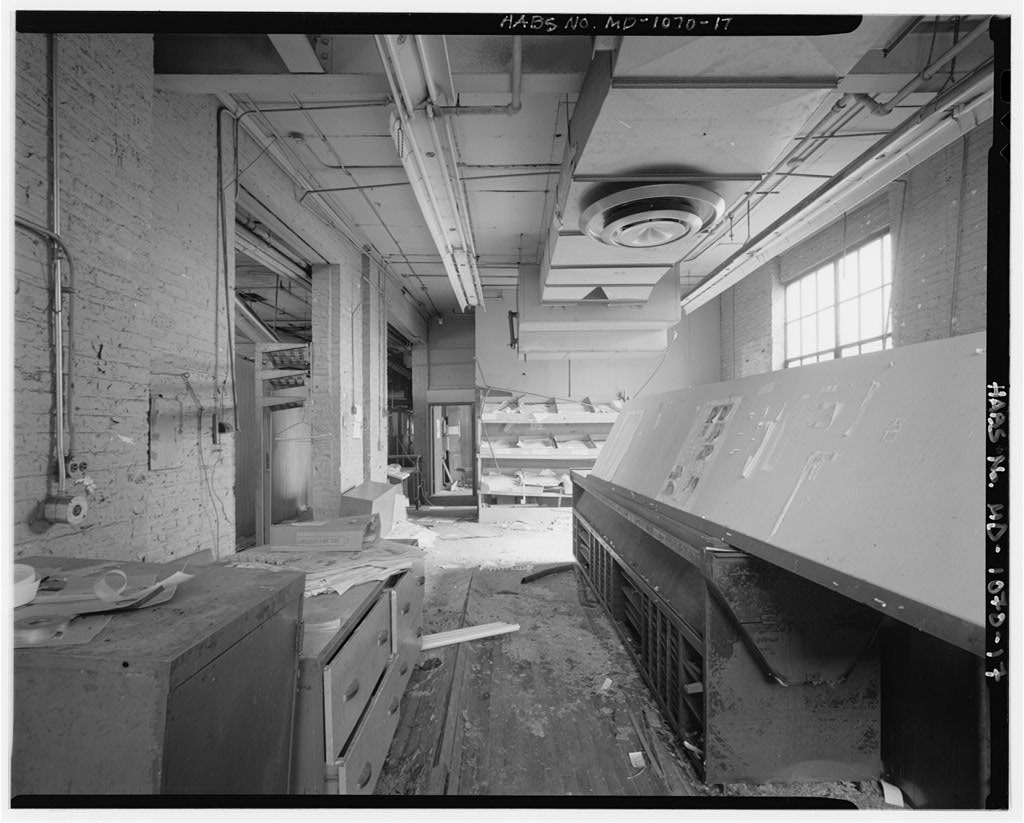 628 N. Eutaw St. Historic American Buildings Survey. Library of Congress
As of 2020, the addresses listed on the Afro's website were 145 Ostend Street for the Baltimore Afro-American, and a 2nd floor suite in the Uline Arena Building at 1140 3rd St. for the Washington Afro-American.
Licensed under a Creative Commons Attribution 4.0 International License
​© 2020 Building the Black Press