132 West 65th Street
17 West 135th Street
2293 Seventh Avenue
2271 Seventh Avenue
2340 Eighth Avenue
The New York Amsterdam News was founded in 1909 by James H. Anderson, a local Black businessman who lived in East Harlem. Its origins story echoes the humble early development of many Black newspapers during the late 19th and early 20th century which would go on to gain national and international prominence such as the Chicago Defender. Just as Robert Abbott had begun the Defender four years earlier at the kitchen table of his landlady's apartment on the South Side, so too did Anderson - with little more than "six sheets of paper, a lead pencil, a dressmaker's table and a $10 investment" - use his home address at 132 West 65th Street to launch the fledgling newspaper.
​
The Amsterdam News was named for its proximity to Amsterdam Avenue, a stretch of Tenth Avenue which ran north to south from around 193rd Street to 59th Street and served as a main thoroughfare for much of Manhattan's commercial traffic during the early twentieth century. The below image shows a tract of Amsterdam Avenue a mile or so north of the Amsterdam News around a decade after the newspaper was founded. At the time of its initial publication, this section of Amsterdam Avenue would still have been fairly empty. However, by the end of World War I a new wave of apartment buildings had begun to crop up, signalling the development of the Upper West Side and the emergence of Harlem during the Jazz Age. 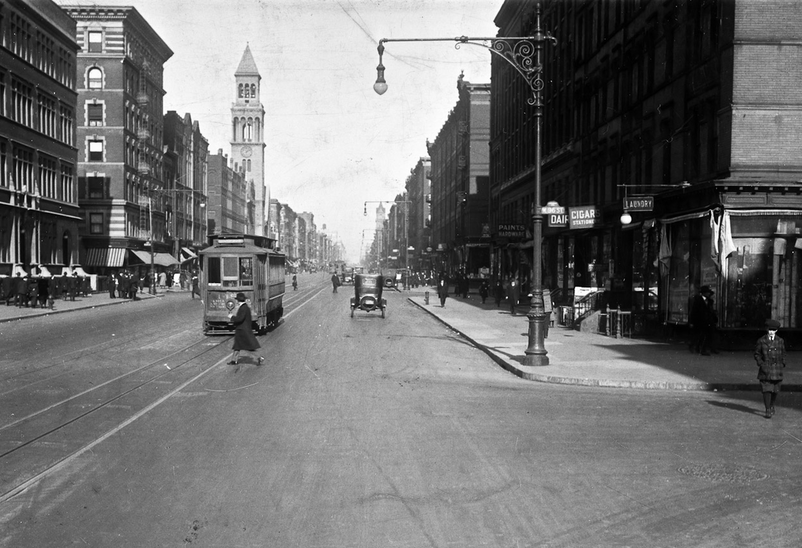 Amsterdam Avenue and West 96th Street, 1919. NYC Vintage Images
Within a year of its first publication the newspaper's rapidly growing popularity, as well as broader demographic shifts in New York's Black community, had prompted Anderson to move its base of operations out of his own home and into a dedicated production space at 17 West 135th Street, around four miles north and on other side of Manhattan Island close to the Harlem River.

Today there is little evidence left of the either the newspaper's first home on 65th Street, or its second location on 135th Street. The 65th Street corridor now houses a cultural hub that includes the Metropolitan Opera House, the Lincoln Center for the Performing Arts, and the Juilliard School. The corner of 135th Street and 5th Avenue which played host to the Amsterdam News during its formative years now features a deli grocery and a branch of CHASE bank. 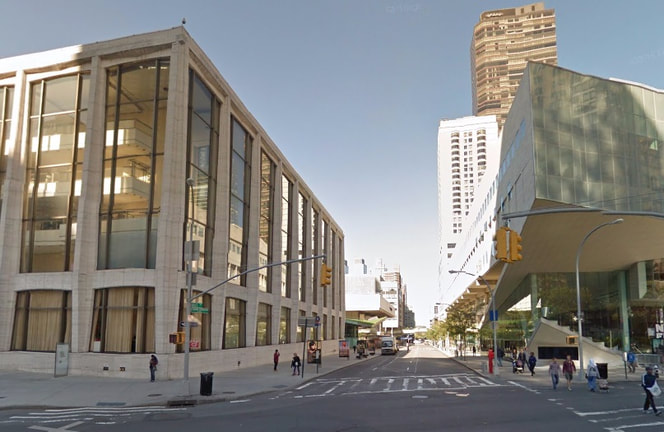 Current view from the intersection of West 65th Street. Google Maps
In 1916 the Amsterdam News moved once more; this time to a location at 2293 Seventh Avenue, a centre unit in a row of five, four storey row houses between 134th and 135th Streets.
​
2293 Seventh Avenue and the two row houses to the North have a brownstone exterior finish, while the two row houses closest to 134th Street have a more conventional brick finish. These row houses are book-ended by brick tenement buildings which are one storey higher. When taken together, the row houses and the tenement buildings occupy the entire east side of Seventh Avenue between 134th and 135th Streets. 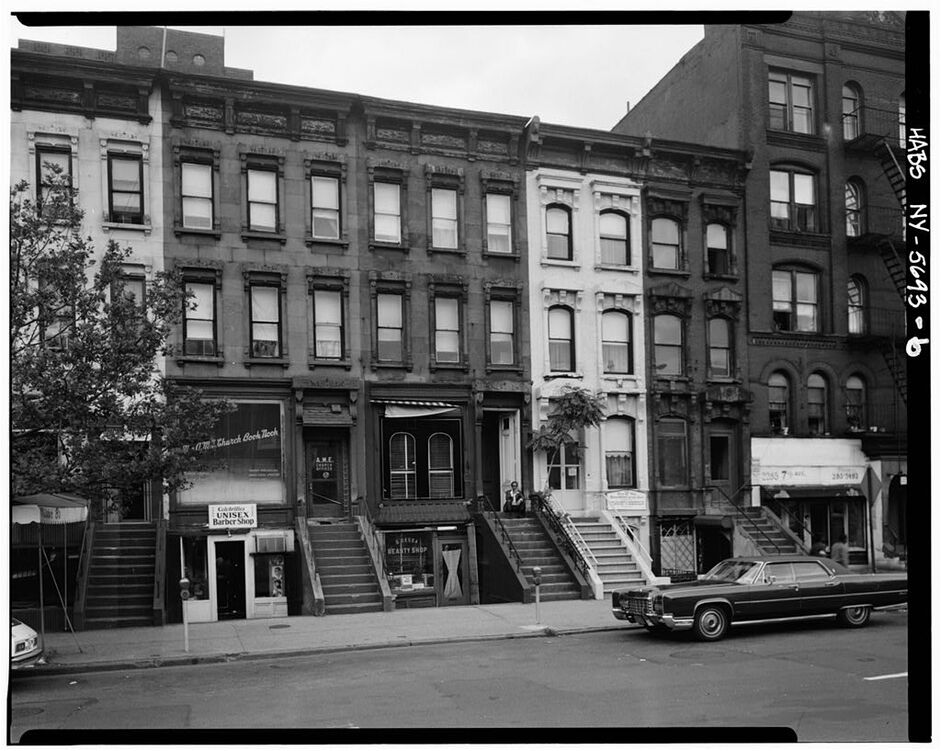 2293 Seventh Avenue. National Register of Historic Places
The relocation provided further evidence of the changing cultural and political geography of African American urban life, as Harlem began to emerge as the centre of New York's - and by extension the country's - Black social, political and cultural activism. While the newspaper would retain its name, and therefore its connection to the West Side, its future would become ever more linked to Harlem and the neighbourhoods Black residents.

As the image below illustrates, the building was hardly an ideal environment in which to produce what was quickly emerging as one of the nation's leading Black newspapers. The space was long and thin, and stretched over a number of floors which made communication between different departments awkward. Lighting in the building was also a recurrent problem for the newspaper's editors. 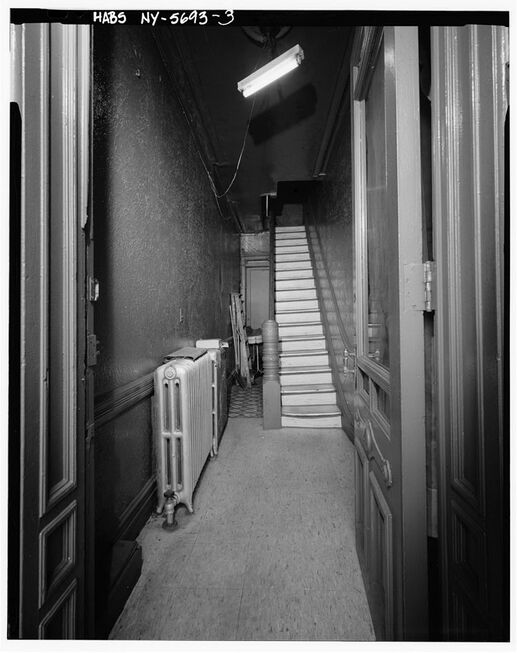 Interior of 2293 Seventh Avenue. National Register of Historic Places
These limitations were in some ways compensated by its location, which placed the Amsterdam News at the heart of Harlem's vibrant cultural politics. 2293 Seventh Avenue was just minutes away from the legendary 135th Street Branch of New York Public Library - better known today as the Schomburg Center for Research in Black Culture.

A few streets north, on a two-block section running between 138th and 139th Street, was the St. Nicholas Historic District, better known as "Striver's Row." This section of elegant townhouses, which were built by New York developer David King, Jr. during the late 19th century, became famous during the 1920s as the home of some of Harlem's most prominent black entertainers and public figures.

The newspaper's offices were also located close to some of Harlem's most popular entertainment hot-spots, including the Crescent Cafe at 126 West 135th Street and the Astoria Cafe at 2275 Seventh Avenue. On the opposite side of the street, at 2294 Seventh Avenue, was Small's Paradise, which became one of black New York's premier nightclubs during the 1920s. It was owned and operated by Edwin Smalls, a former elevator operator and a direct descendant of the legendary civil rights hero and black Congressman Robert Smalls. 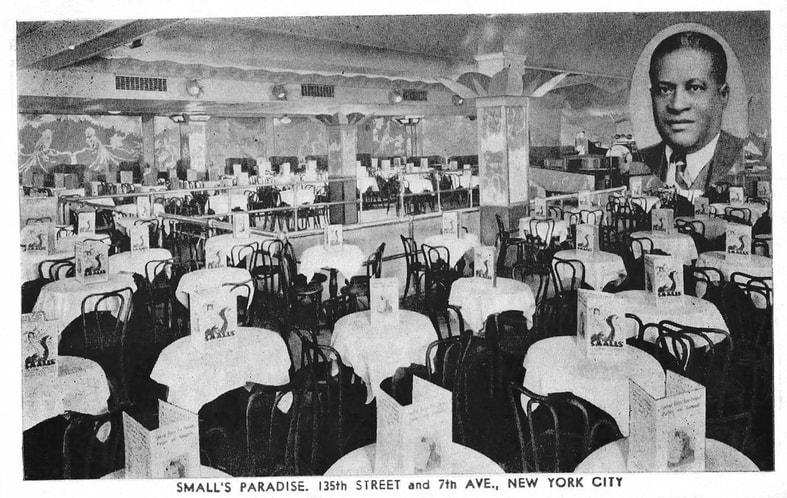 Small's Paradise Postcard, c.1928. New York Public Library
​In 1938 the Amsterdam News relocated to another property, and its offices at 2293 Seventh Avenue were leased to another company. In 1975, as part of the Afro-American Bicentennial Corporation's efforts to recognise important black historical landmarks, the building was put up for consideration as a landmark to the National Parks Service.

The building which the Amsterdam News moved into was a few minutes South at 2271 Seventh Avenue. However, this was only a short-term relocation before the newspaper moved into its current home at 2340 Eighth Avenue during the early 1940s. 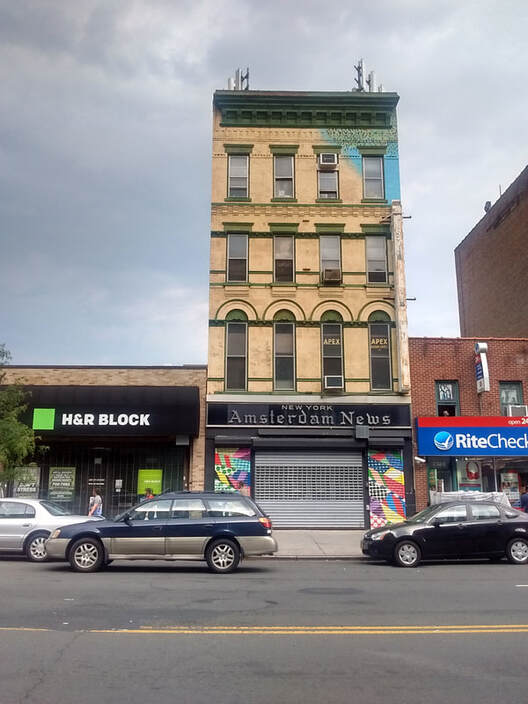