295 Madison Avenue
130 Fifth Avenue
260 Madison Avenue
​500 Seventh Avenue
Black Enterprise was founded in 1970 by Black entrepreneur and publisher Earl Graves, Sr. Aimed towards an emerging class of Black professionals who had benefitted from the continued integration of corporate America, the magazine became a vocal advocate for corporate capitalism and the Black middle-class. 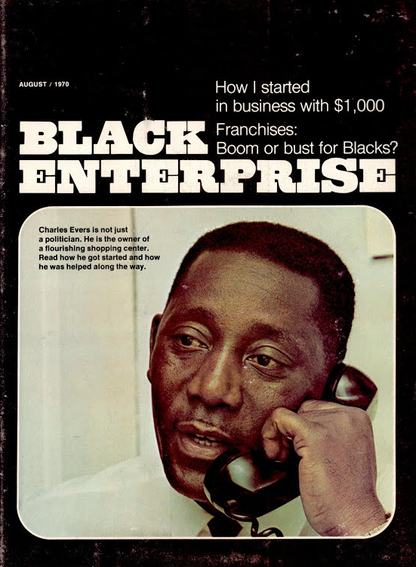 Early Cover of Black Enterprise, August 1970
Graves was born and raised in New York City, spending the majority of his childhood in Bedford-Stuyvesant. He would go on to earn a bachelors degree in Economics from Morgan State University, a historically black public college located in Baltimore, Maryland, where he graduated in 1958. Graves' big break arrived in 1968, when he secured a position on the advisory board of the Small Business Administration. He used this position to develop a newsletter designed to promote the need for black consumer power and business development. This newsletter would serve as the blueprint for Black Enterprise, which launched its first full issue in August 1970. The magazine promised to become a mouthpiece for "the informational needs of the Black man and woman wanting to make the best possible use of their talents and skills in the wide world of business."
The first offices of Black Enterprise magazine were housed at 295 Madison Avenue, otherwise known as the Lefcourt Colonial Building. An attractive 45 story office building, the Lefcourt Colonial is located between Madison Avenue and Park Avenue and 40th and 41st Street. The building's most distinctive feature is its tower, which is visible from most of the midtown area. The tower features obelisks and striking blue terracotta medallions which were produced by the Guastavino Company.

​While much the building's street level retail and lobby space have been modernized, the original facade remains largely intact, replete with terracotta, false balustrades and layered brickwork. Architectural critic Christopher Gray has described the building as a "wonderfully peculiar" relic among the increasingly corporate architectural facades of Midtown. 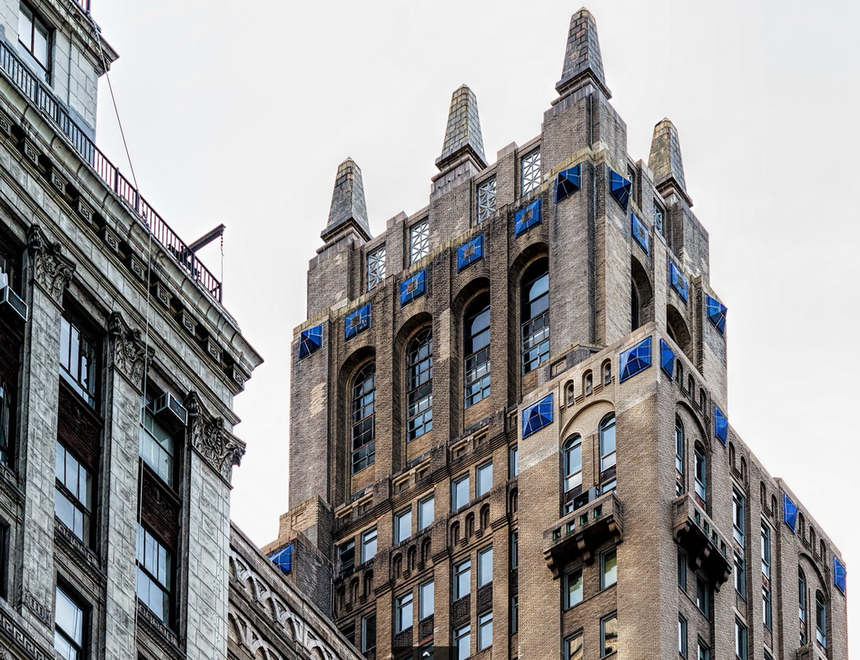 295 Madison Avenue. Newyorkitecture
The building was completed in 1930 and took its name from architect Abraham Lefcourt, a prominent force in 1920s New York Real Estate. Although Lefcourt is a largely forgotten figure in modern architectural circles, during the Real Estate boom of the 1920s he was one of New York's most prolific developers. Born in the UK to Russian-Jewish emigre parents, Lefcourt's family moved to the United States when he was a young boy, where they settled on the Lower East Side of New York City.

Lefcourt made his fortune in garment manufacturing, and used the capital generated within this industry to move into real estate in 1910.​ By 1930 Arthur Tarshis of the New York Times reported that since 1910 Lefcourt had overseen the construction of 31 commercial buildings all across New York. Alongside the Lefcourt Colonial building at 295 Madison Avenue, perhaps the most significant structure he commissioned was the Lefcourt-State building on 37th Street designed by Ely Jacques Kahn.
295 Madison Avenue would continue to house the Black Enterprise offices until the early 1980s. On January 2, 1981, a massive fire destroyed an entire floor the magazine's offices, claiming no victims but causing an estimated $1.5 million in damages. The severity of the damage was partially due to the company's offices being closed for the New Year, meaning that no-one was able to raise the alarm.

The fire was subsequently attributed to a 28 year old arsonist who had been working as a news messenger - a job which had provided him with access to multiple sites along Madison Avenue. Following the arson, Earl Graves decided against restoring the offices, choosing instead to temporarily rent other space at 295 Madison while searching for a more suitable permanent location that would allow "greater flexibility for expansion and growth."
While the building was not as physically imposing as the Lefcourt Colonial building, its interior spaces offered Graves much greater scope to create a bespoke publishing environment. The entrepreneur turned to interior design company Levithan & Orsini, and tapped up Herbert Construction as a contractor. As part of the construction contract, Graves negotiated an agreement which ensured that 60 percent of the Herbert Construction workforce would be black, and also sought to provide opportunities to black-owned firms as subcontractors and suppliers.

For the staff at Black Enterprise, the relocation "fulfilled at times what appeared to be an elusive dream" - a permanent home from which the magazine could position itself at "the forefront of our economic and political struggle." No doubt inspired by the lavish interiors of other Black media buildings such as the Johnson Publishing corporate headquarters in Chicago, splurged to create a unique offices intended to embody the magazine's aspirational, professional aesthetic.
​The magazine showcased its new headquarters for readers in its October 1984 issue, describing the site as mixing "the traditional with state-of-the-art technology." In addition to housing a staff of around 60, the new offices included public areas such as a library and an amphitheatre. The largest challenge for interior design team Levithan/Orsini was transforming the building's top two floors from an industrial space used by clothing manufacturers into a functional and modern corporate headquarters. 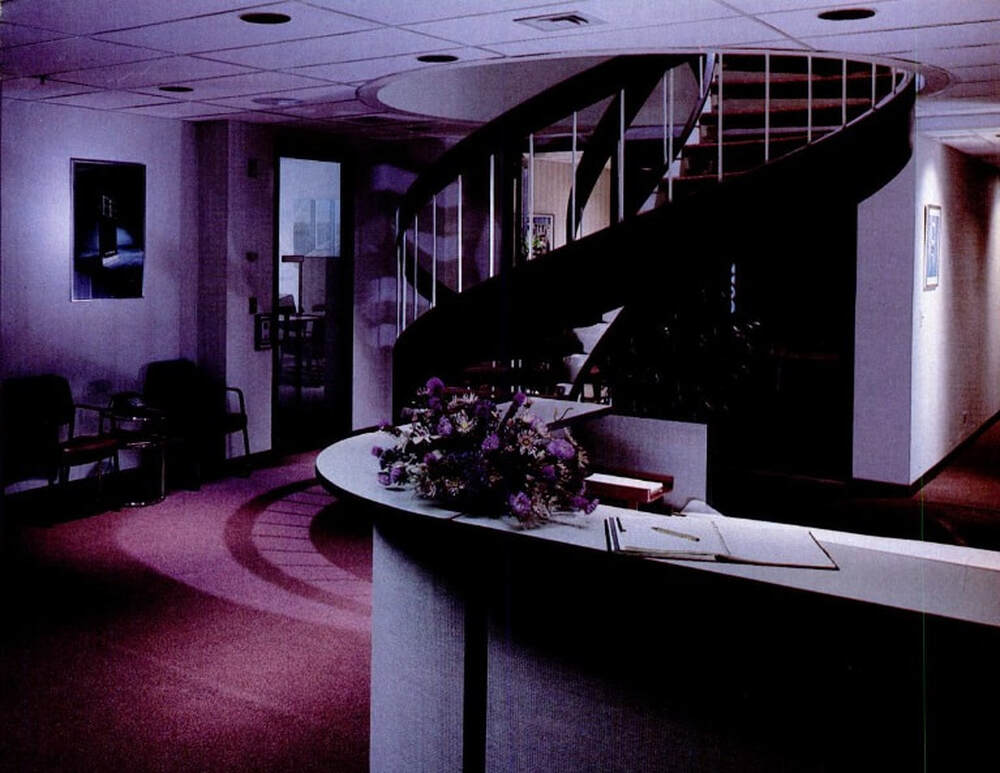 Reception area of new Black Enterprise offices at 130 Fifth Avenue
In recent years the offices of Black Enterprise have moved several times. While I am not clear on the exact date, the magazine's operations relocated from Fifth Avenue to a new site at 260 Madison Avenue during the early twenty-first century. This location was just a few minutes south of its first home in the Lefcourt Colonial building at 295 Madison Avenue. A distinctive glass wedding-cake style tiered skyscraper, 260 Madison Avenue was completed in the early 1950s and was one of a number of building projects developed by architect Sylvan Bien, an Austrian born architect who was perhaps most famous for a series of white-glazed brick buildings constructed along Fifth Avenue. 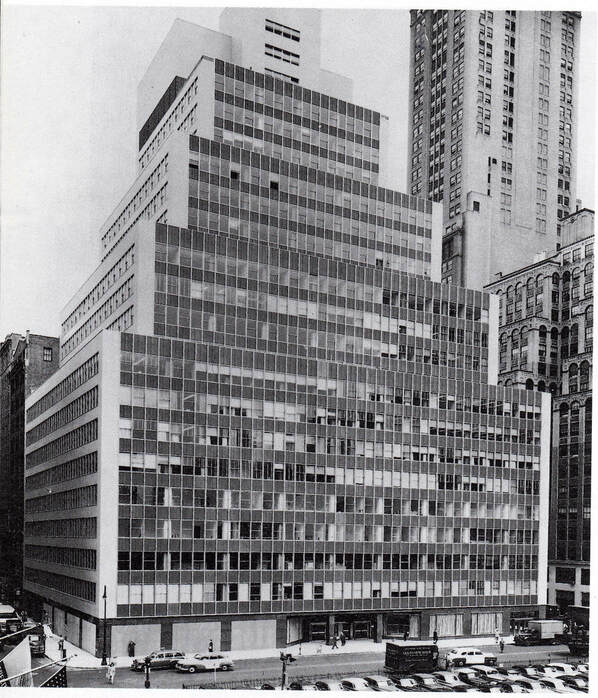 ​260 Madison Avenue, 1950s. Wired New York
Black Enterprise's current address is listed as 500 Seventh Avenue, on either the eighth or twelve floor, depending on whether you go off the information on its website or business listings on other sites.
Licensed under a Creative Commons Attribution 4.0 International License
​© 2022 Building the Black Press