Throughout history, the opening of new offices or publishing plants has been heralded as evidence of the power of individual Black publications and the collective health of the Black press as an institution. When the Western Appeal  moved to a new suite of Chicago offices in 1888, it championed the relocation as confirmation of its role as "the people's paper." When the Pittsburgh Courier opened its new plant at 2628 Center Avenue, it was celebrated as "an epoch in Negro history." For Johnson Publishing, the opening of the company's striking new corporate headquarters in Chicago during the early 1970s was further evidence of the Black press' enduring relevance to Black communities at home and abroad.

However, the opening of the new Johnson Publishing headquarters also came at a moment of perceived crisis for the Black press. Just one year after the building's public unveiling, Black journalist Francis Ward announced that the Black press was "fighting for its institutional life - caught between a highly vocal segment of blacks who criticize it as outdated...and the rising costs of production and news gathering." During the 1960s and 1970s, these concerned were compounded by a Black press "brain drain," with the integration of newsrooms at mainstream media outlets leading to an outflow of talented Black journalists to publications such as the New York Times, Washington Post, and Boston Globe. More recent events, including the racially disproportionate impact of the digital revolution and the Great Recession on American media outlets, has contributed to the demise of many longstanding Black periodicals and has left the future of many more Black publications hanging in the balance.
In turn, Black media buildings have come to play a major role in public debates over the "rise and fall" of the Black Press and its relationship to Black communities. Just as the unveiling of new buildings was celebrated as a symbol of Black progress, so too has the downsizing of Black publications and the abandonment, sale or demolition of landmark headquarters been held up as evidence of the Black Press' broader decline.​

​When Johnson Publishing moved into its custom-built corporate offices at 820 South Michigan Avenue, it was seen by Eric Easter as "its own loud protest - a visual pronouncement that Black America had arrived in all its striving, outrageous, hip and fashionable glory." Four decades later, the building's purchase by Columbia College Chicago provided potent ammunition for those who argued that the Black Press was an outdated enterprise. Against the backdrop of Johnson Publishing's downsizing and the ongoing fire-sale of its assets, 820 South Michigan stood vacant and decaying - no longer a symbol of Black entrepreneurial spirit and cultural mores, but a monument to past glories.

Similarly, as the Afro-American bought up property on the block around 628 North Eutaw Street during the early decades of the twentieth century, this expansion mirrored its emergence as one of the nation's largest Black publishing syndicates - a status reinforced further by the installation of a new press in the 1930s, reported to by "the largest printing press ever [used] by a Black paper." However, by the early 1990s, the site had been abandoned, with nothing but abandoned equipment and stacks of unsold papers left behind as evidence of its proud publishing heritage. 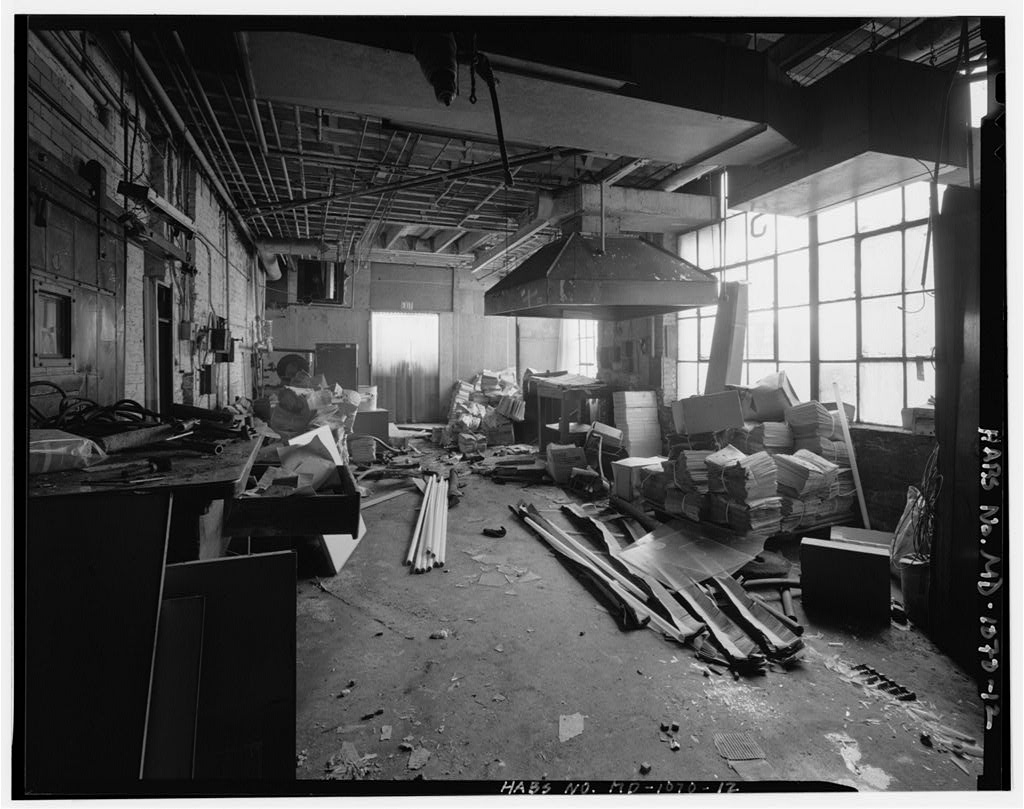 Abandoned newspapers and printing equipment at the former headquarters of the Baltimore Afro-American. Library of Congress
In exploring the building history of the Black press, it is just as important to consider what happens to Black press buildings after Black publications leave.​
In many cases this is a story of loss. In Chicago and across the country, the disproportionate impact of postwar "slum" removal on Black communities led to many landmark Black Press locations being destroyed. Where physical structures have survived, they have often been renovated in ways that dislocate their current use from their historical significance.

Debates into historical preservation came to the fore following the sale of 820 South Michigan Avenue. While landmark status saved its exterior and the iconic Ebony/Jet signage on its roof, the building's interiors were gutted; a decision which, for many readers, was akin to "watching someone lose their mama's house after all her sweat and tears." Today, the bespoke fabrics and bold patterns which embodied Johnson's own vision of racial progress and Black modernity have been replaced with sterile apartments divorced from the building's colorful past. 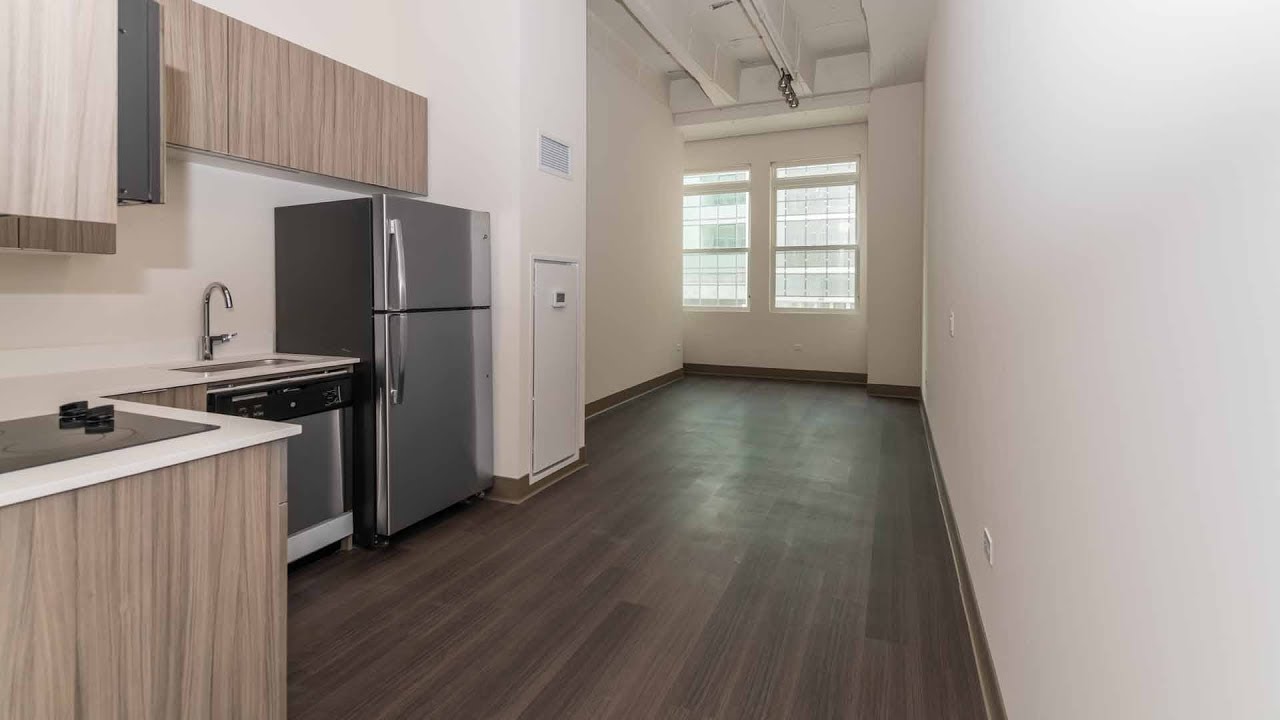 A mid-sized studio at the South Loop's new 820 South Michigan, 2019. YoChicago
At the same time, the Chicago Defender's return to its "spiritual home" by way of a new headquarters on the Chicago South Side was celebrated as part of a renewed commitment to the city's Black communities and its roots as a "community" paper.

"We are going back where we belong. It's the beginning of a new era of the Chicago Defender that reinforces our strong commitment to the African American community and the communities of greater Chicago...We will be more accessible for our readers, advertisers, and supporters...they can just come on in and continue building a relationship with us." 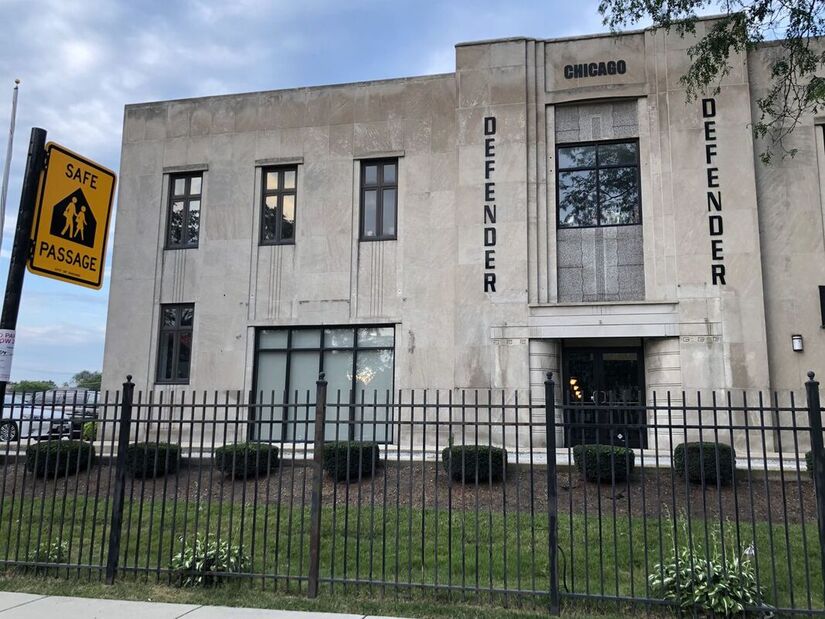 Chicago Defender headquarters at 4445 South King Drive. Wikimedia
In other locations, the redevelopment and repurposing of Black media buildings speaks to the impact of gentrification and urban renewal on inner-city Black communities. The Defender's former location at 2410 South Michigan Avenue, under its new role as an events space, has become a focal point in efforts to revitalize the Motor Row district and South Michigan corridor. Conversely some Black press sites, such as the former Chicago Bee building on South State Street, continue to serve Black Chicagoan communities as civic or educational spaces. The Bee building was transformed into a branch library during the 1990s, and a major renovation project in 2018 provided another opportunity to reflect on its history and future. At the building's reopening, Major Rahm Emmanuel declared that the library was "not only a commemoration of Bronzeville's history, it is a nod to what is to come in the community."

​Extant or extinct, Black media buildings provide us with an important window into larger debates about the historical significance and continuing relevance of the Black Press, and the relationship between race, space and community in the modern American city.

A HOUSE FOR THE STRUGGLE >>>