The Pittsburgh Courier began life in 1907 when E.N. Harleston, an amateur poet and security guard at the Heinz Company plant in Pittsburgh, decided to begin printing a newspaper to help publicize his work. In 1909 a quartet of local Black journalists and businessmen – Hepburn Carter, Edward Penman, Harvey Tanner and Scott Wood – joined the publication and helped to develop its editorial content and circulation.
The following year, Robert Lee Vann, a North Carolinian native and one of Pittsburgh’s few licensed Black attorneys, joined as legal counsel. In the fall of 1910 Vann became the paper’s editor – a position he would remain in until his death in 1940. Under his leadership, the Courier sought to champion Black business and entrepreneurship, and speak out on the impact of "Jim Crowism" in the Steel City. 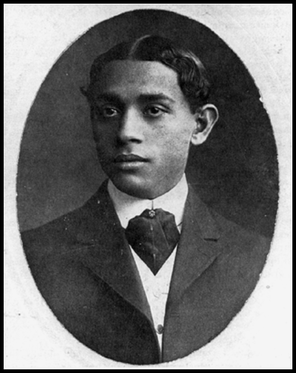 Robert L. Vann as a young man, c.1901
Carnegie Library of Pittsburgh
​Like many fledgling Black press enterprises, the Courier’s early offices were inauspicious. During its early years, the paper moved between spare rooms and small offices in the Hill District, home to many of Pittsburgh’s African American residents. In early 1911 its main office was listed as 1209 Wylie Avenue and then 1212 Wylie Avenue, located above Jackson’s Undertaking Company. After several years Vann moved the paper’s base of operations into his law offices, located around one mile southeast at 518 Fourth Avenue.

Early letterhead showing the Courier's Fourth Avenue address
National Afro-American Museum and Cultural Center
​Like many Black newspapers in northern cities, the Courier’s influence grew in tandem with the Great Migration of African Americans out of the South. Between 1910 and 1930, Pittsburgh’s Black population surged from 25,000 to more than 55,000, significantly boosting the Courier’s local audience. Eager to expand the newspaper’s influence, Vann hired a flurry of new contributors following the Courier’s move to Fourth Avenue, and also expanded his own influence through new civic and political engagements. In 1924 the Courier announced the opening of new branch offices in New York, Philadelphia, and Chicago, helping to consolidate its growing influence across the northeast and Midwest. The New York office was located at 2305 Seventh Avenue, close to local Black landmarks and publishing concerns such as the Harlem Branch of New York Public Library and the headquarters of the United Negro Improvement Association and its influential newspaper the Negro World. The Chicago office was based at 3451 Michigan avenue, just a few minutes’ walk for the imposing national headquarters of the Chicago Defender. 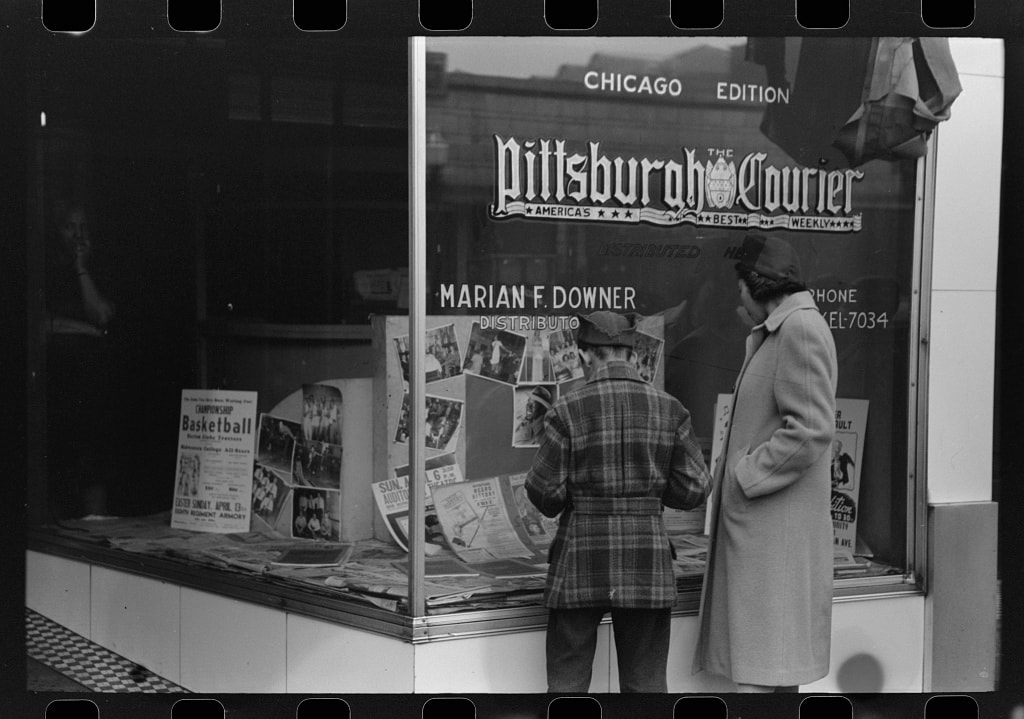 Pittsburgh Courier office in Chicago, 1943
Works Progress Administration
The Courier's emergence as one of the nation's leading Black papers was confirmed in 1929 with the unveiling of an impressive new plant at 2628 Centre Avenue in the Hill District. Constructed for a reported cost of more than $100,000, the plant included a state-of-the-art printing press capable of producing 35,000 copies of the newspaper each day.  Ramon Clark, a masters student at the University of Pittsburgh, appeared to encapsulate the sentiments of many local residents with his contention that:

the first day's running of the Pittsburgh Courier's press mark[s] an epoch in Negro history...the roar of the press motors, the tick-tick-clank of the linotype machines mark a new day in Negro progress, particularly that of our own city. 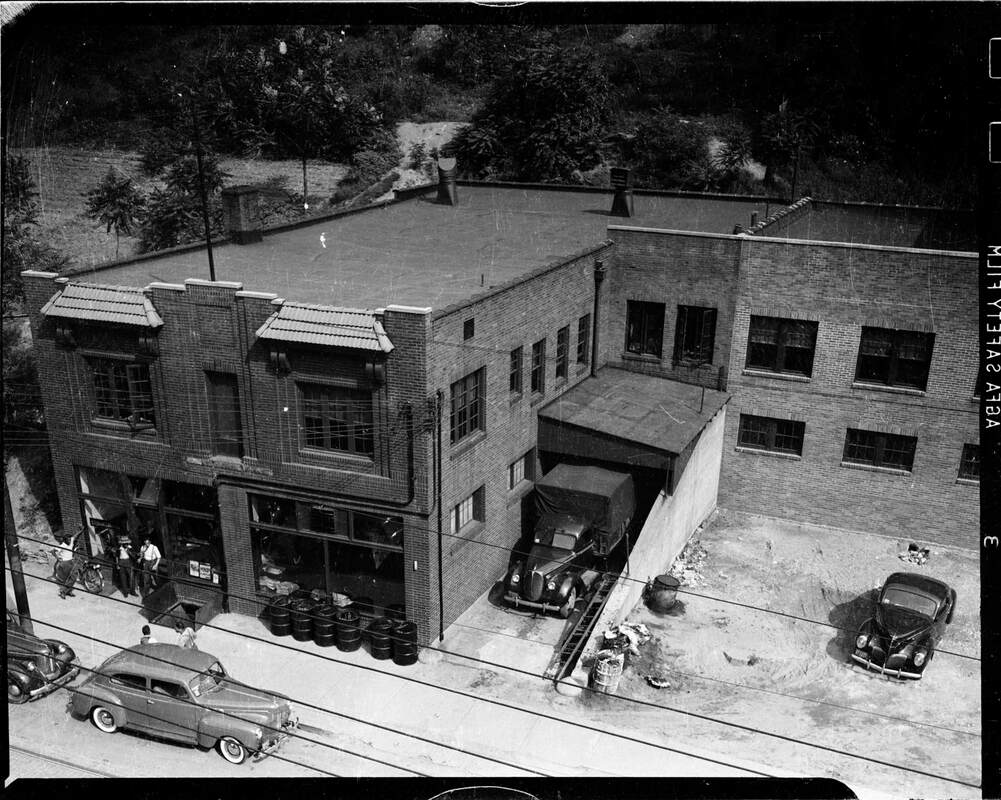 Exterior of Courier building, Centre Avenue
Carnegie Museum of Art
The opening of the Courier's new plant propelled it to new heights, and within just a few years its weekly circulation had doubled to more than 100,000. In contrast to the struggles of many Black newspapers during the Depression years, Vann's newspaper continued to expand. By the mid-1930s the Courier had cemented its standing as the number one Black newspaper in the nation, supplanting the Chicago Defender.

Vann's death in 1940 did little to slow this momentum, and the Courier's influence expanded further during the World War II era. The paper's call for a "Double V" campaign - against fascism abroad and segregation at home - was enthusiastically supported by its readers and by other Black periodicals. Under the editorship of Ira Lewis, who took control of the newspaper following Vann's death, the Courier reached a circulation peak of more than 350,000. During the 1930s and 1940s - a period widely recognized as the Courier's "golden age" - its publishing plant in Pittsburgh's Hill District became a popular destination for all manner of Black celebrities, politicians, and public figures. 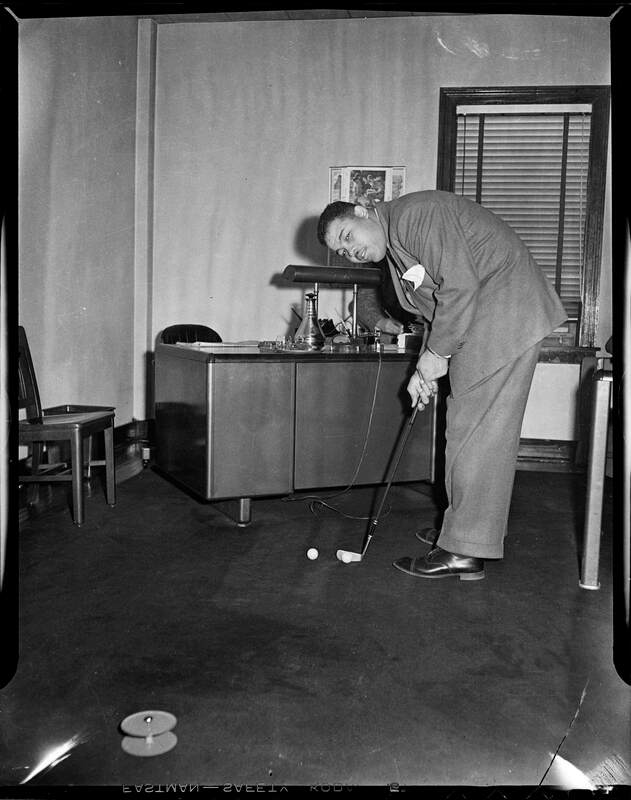 Joe Louis playing golf at the Courier offices, 1946
Carnegie Museum of Art
Like many Black newspapers, the Courier's circulation had begun to decline significantly by the early 1950s. Ironically, the effectiveness of Black periodicals in drawing attention to critical early victories and struggles of the civil rights era hastened this decline, as more and more mainstream publications were drawn to the "race beat." As mainstream media outlets began to cover Black issues in more detail and integrate their pressrooms, editors and readers were lured away from the Black press in growing numbers. By the early 1960s the Courier was under significant financial pressure, and the paper was sold to John H. Sengstacke, the publisher of its longterm rival the Chicago Defender. Black press historian Patrick Washburn has highlighted the Courier's sale as a landmark moment for the Black press in the United States.

The death of the original Courier marked the end of an era. The black newspapers' influence and power was gone, taken over by white newspapers, and to a lesser degree television.

Faced with a daunting array of unpaid debts, Sengstacke chose to close the original Courier and reorganized the paper under a new name - the New Pittsburgh Courier - with this revamped publication launching in 1967. This decision helped to stabilize the publication and less to a period of relative succcess. In 1974 Sengstacke appointed Hazel Garland as the paper's editor-in-chief, making her one of the first Black women to head a major Black newspaper.

The Courier's restructuring required Sengstacke to raise critical funds, and he made the difficult decision to sell its iconic Centre Avenue publishing plant. Shortly after the newspaper's purchase, the Courier reported that "the old Pittsburgh Courier Publishing Company will operate only as a liquidating company to liquidate the built and its other physical assets." Without its own printing plant, the paper was forced to outsource print productions to Cleveland. 2628 Centre Avenue was eventually sold to Allegheny Union Plaza Inc., a non-profit subsidiary of the Allegheny Union Baptist Association. The plant was demolished to make way for $1.3 million apartment complex for low and moderate income families, with the Baptist Association breaking ground on the project in 1970. Robert Madison, an accomplished Black architect and a partner at Cleveland-based firm Madison-Madison International, was behind its design, and contracting work was taken up by William Baker - the first minority contractor with a $1 million contract with the federal government.
At the time of its design and construction, Allegheny Union Plaza was championed as a victory for Black enterprise and business development. However, by the mid-1970s a serious of major structural defects had been uncovered in the build, leading to a spate of finger-pointing and costly repairs that were contested between architect, contractor, and the federal government. It appears that the Department of Housing and Urban Development ultimately shouldered the cost of repairs, and the complex still stands today.

Two commemorative markers exist close to the site, marking its former significance as the home of the Pittsburgh Courier. The first marker, dedicated to publisher Robert Lee Vann, explicitly acknowledges the site as the newspaper's former home. The second market, located just a few meters away, is dedicated to Frank E. Bolden. 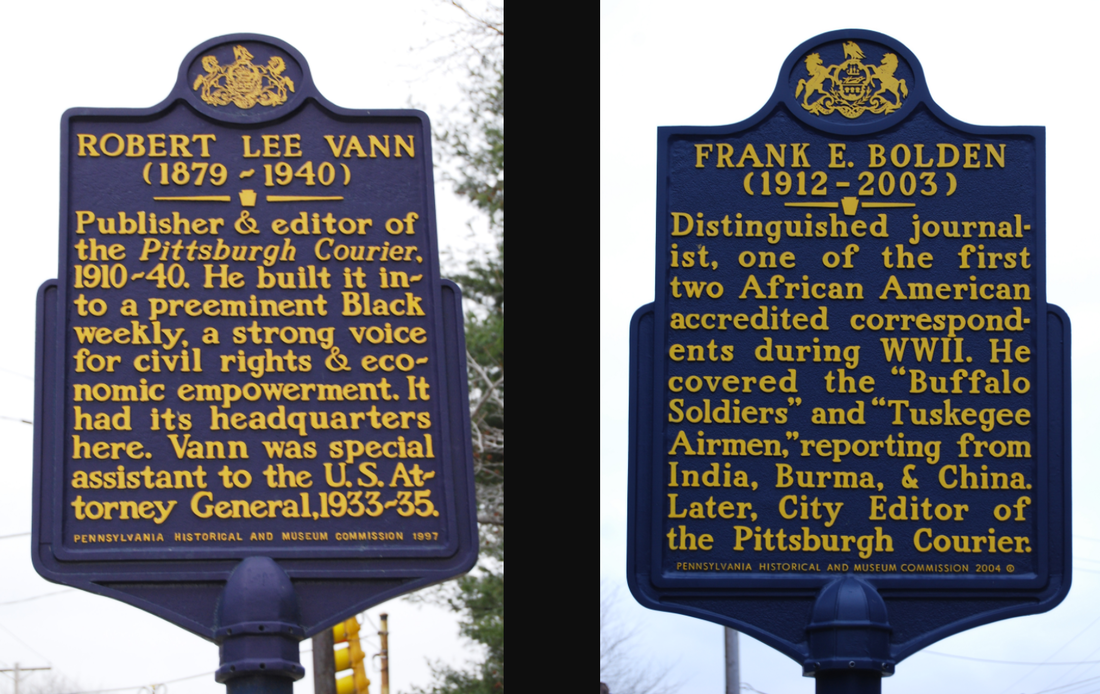 Historical Marker Database. Photograph by Mike Wintermantel
Following the sale of 2628 Centre Avenue, the Courier moved into a new home at 315 E. Carton Street in 1966. This move marked the first time that the newspaper's offices had been located on the South side of the Monongaheia Ra River.
John Sengstacke maintained control of the Courier until his death in 1997, when the paper transferrred to the control of a family trust. The Chicago Defender and other company holdings had been reorganized under the banner of Sengstacke Enterprises, Inc., and it required a lengthy review process to work out how to move forward. In 2003 a consortium of Black business leaders in Chicago and Detroit rallied together to work Real Times Media, which absorbed the assets previously connected to Sengstacke Enterprises, Inc. - including the New Pittsburgh Courier.

As of 2020, the New Pittsburgh Courier continues to be based on East Carson Street.
Licensed under a Creative Commons Attribution 4.0 International License
​© 2020 Building the Black Press